How do you solve a problem like the Clintons? 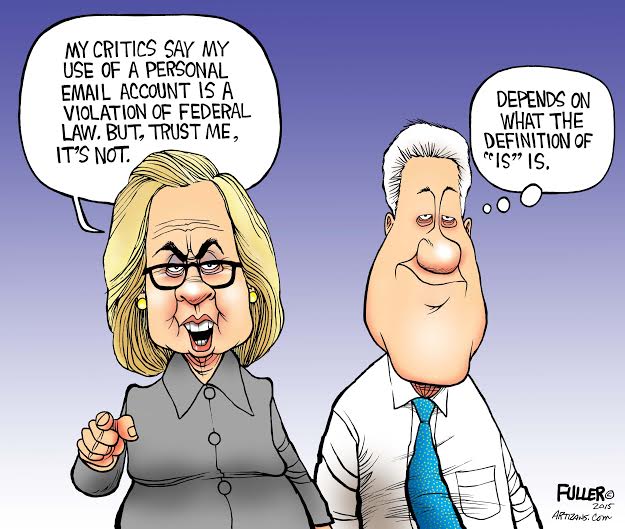 -- This being the 50th anniversary of the film "The Sound of Music," please permit me a poor adaption of a few of its song lyrics, which fit in nicely with our current political climate.

How do you solve a problem like the Clintons? Their incessant vacuuming of cash and skirting (no pun intended) of laws and regulations would place lesser mortals in danger of prison, yet the Clintons' walk free, their money-making careers booming.

'Ray,' the name of a Clinton foe

Me, a name that fits myself

Fah, as far from law I run

So, I say when bending laws

Tee(off), with me for lots of 'bread'

Which brings us back to dough."

And lots of it.

OK, so I'm not Rogers or Hammerstein, but, joking aside, why can't just hand over the email server she kept in her home for "private" emails? I'll tell you why, because she, or someone else, has wiped it clean and we are to take her word for it that there was nothing there before it was wiped.

One doesn't have to think long or hard about how this would play if were a Republican (which she once was). Liberal editorialists and commentators would be screaming about a cover-up, her questionable ethics, her unfitness to be president and calling for someone else to challenge her.

All would have to do to keep this latest outrage from becoming even more outrageous is to turn over the server to an independent third party, as requested by Rep. (R-S.C.), who heads a special House committee looking into the terrorist attack on the U.S. consulate in Benghazi.

Recall that IRS Commissioner testified under oath before a congressional committee and claimed that the emails of , the former director of the Exempt Organizations Unit, had been "lost" and the servers unrecoverable, only to later discover they were not lost and were, in fact, recovered.

If has nothing to hide, she will hand over the server. Truly private emails can be kept private. Any others that survived erasure should be revealed, or this will -- and should -- hang over her anticipated presidential candidacy, along with other dark clouds.

Former aide turned political pundit, Dick Morris, says that neither Bill nor types well, and email messages longer than a few words were likely composed and sent by aides from the aides' own email accounts. Those servers and email records should also be subpoenaed for examination by an independent investigator. You can bet the won't do anything. Was that one of the reasons Hillary spent an hour with President Obama last week at the White House?

Sen. (R-KY), who is expected to announce his presidential candidacy in April, has vowed to make ethics -- or lack of them -- a major part of his campaign. He should. The Clintons have a lot of political baggage; so much, in fact, that if their political baggage were real baggage, they'd likely be charged an overweight fee on any commercial airliner. But, of course, they fly private.

The big question is will the public care? We expect so little of our politicians these days that ethics and morals don't seem to matter as much as they once did, as long as those government checks keep coming. By not expecting more, we get less. We get less because the people we elect to public office often reflect the ethical concerns and practices of the country.

Now back to "The Sound of Music." How do you solve a problem like the Clintons? You keep them away from elective office. You tell them "So long. Farewell. Auf Wiedersehen. Goodnight."