The memo and the truth 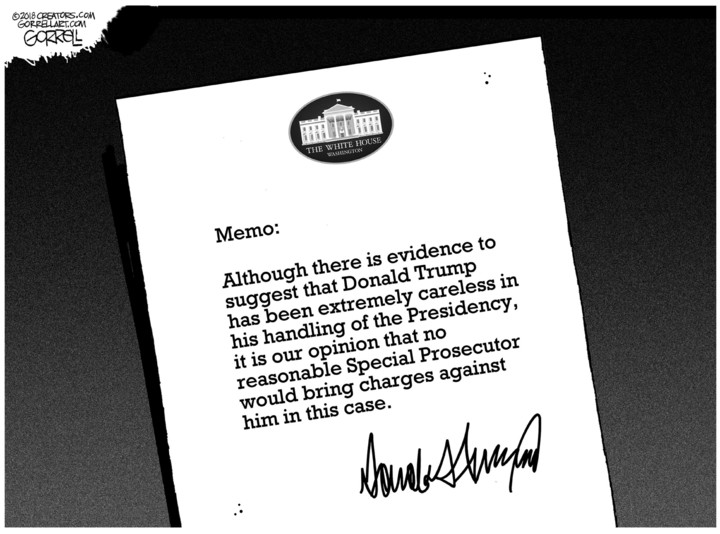 Partisans tend to read, watch and listen only, or mostly, to information and opinions that reinforce their beliefs. If information surfaces that counters those beliefs, it is usually disparaged, excused or ignored. That's human nature.

Such is the case with the "memo" released last Friday by the Republican majority on the . The four-page document alleges, in the words of a editorial: "the FBI and the appear to have been used to influence the 2016 election and its aftermath."

If true, that is real collusion.

Conservative partisans are rejoicing and having an "I told you so" moment. Partisans on the left are reading coverage and editorials in and the and drawing sustenance for their position that the memo is a "nothingburger" and does not undermine Special Counsel investigation into the Trump campaign's "collusion" with to influence the election. That not a shred of credible evidence has been produced on this point does not deter them.

Critics of the memo, who tried to stop its release, initially contended it undermines and smears the FBI and the . No it doesn't. It suggests that a few higher-ups in those agencies used their power and influence in an attempt to keep from becoming president and after he was elected to undermine his presidency. Now that the memo has been made public, partisans on the left, who once claimed its release would seriously damage the FBI and the DOJ, now say there is nothing there. It can't be both a danger and nothing, so which is it? In , having it both ways is a cherished tradition.

Politicizing a powerful federal agency is nothing new. Think and her efforts while at the to thwart tax exemptions for conservative and religious organizations, as well as a few progressives. Or recall how and his attorney general, , politicized the and in an attempt to punish their political enemies.

The most damning part of the memo is the assertion that the and used a "dossier" authored by ex-British intelligence officer and funded in part by the Hillary Clinton campaign and the in an attempt to smear .


It was this dossier that the government agencies used to convince a FISA judge to issue a warrant allowing Trump campaign official and possibly others to be spied on. The memo asserts those seeking the warrant did not tell the judge about the fingerprints of the Democratic Party and Clinton campaign on the dossier. That is worse than oversight. If true, it is criminal and possibly prosecutable behavior.

Nunes contends the subsequent warrants issued by the FISA judge were based on flawed and incomplete information and thus would likely not have been issued had the judge been in possession of additional facts.

The Republican memo is not the end but rather the beginning to exposing behind-the-scenes maneuvering by liberals to keep out of the and put in it. The public has a right to know all the facts in this case, wherever they lead.