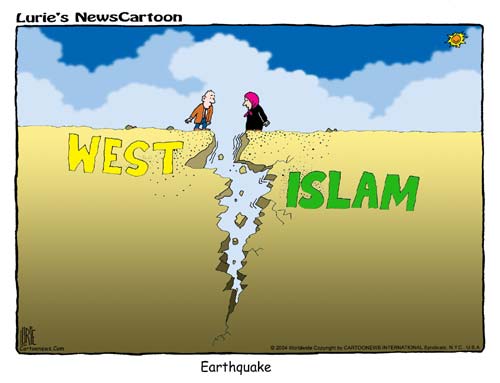 The late Pulitzer Prize-winning editorial cartoonist for the , , frequently used religious symbols to illustrate his point of view. Conrad drew the ire of some readers whenever he used the Star of David or a cross in his drawings. Letters to the editor denounced him, but to my knowledge no one showed up at the newspaper to kill him.

This is the difference between radical Islam and other faiths. Jews and Christians have been targets of persecution, but with rare exceptions in modern times those faiths do not encourage, or tolerate, murder in the name of God.

Were he alive today, I wonder if Conrad would draw a cartoon that depicts the Prophet Mohammed in a bad light -- or any light -- following the terrorist murders last week in .

The latest, but most certainly not the last, terrorist attack in is part of a much larger problem exacerbated by Western governments and Western thinking. It is delusional to think that by allowing people into our countries with little or no experience in religious diversity, tolerance, freedom of the press and democracy they will want to become like us. We think they will "catch" democracy, study war no more and beat their weapons into ploughshares. Instead they use our freedoms to promote oppression, intolerance and censorship.

Those who have left countries where few, if any, Western virtues are practiced are not going to be "converted" to faith in democracy. Homegrown terrorists like the killers, are part of the same breed, which wishes to destroy societies they regard as wicked, claiming they are "just obeying orders" from their god. The Charlie Hebdo killers, identified as Cherif Kouachi and his brother Said, were, after two days, cornered in a print shop in Dammartin-en-Goele and killed in the standoff. They wanted to die as martyrs. They died as murderers.

The West's "reach out" strategy has failed to modernize the anti-modernists, not only in , but in and where enclaves of radical Muslims live according to their own laws in “no go” zones.

Are we now stuck with the consequences of our wrongheadedness? Can nothing be done to reverse the trend? Is there no other strategy than to denounce murder "in the strongest possible terms" and pretend that Islam in whatever shade one wishes to color it has no responsibility for things done in its name?

As usual, it is left to to take the lead, but we are not. Our leaders won't even call these mass murders by their right name. If the perpetrators claim Islam inspires and motivates them, what right do we have to contradict them?

President Obama is emptying Guantanamo prison of the remaining terrorists to fulfill a campaign promise. In doing so he is not fulfilling his oath of office to defend against all enemies, foreign and domestic. According to the , in 2008, Cherif Kouachi "had been sentenced to three years in prison in for helping to funnel prospective jihadi fighters from to . He served 18 months, with the remainder of his sentence suspended." He then returned to the "battlefield" -- happy to die there. Said Kouachi reportedly traveled to in 2011, which raised a red flag with the French government, but, according to the , the intelligence services were forced to stop monitoring the brothers when funding ran out.

We should be attacking terrorist training camps in where the shooters reportedly were trained. We should also outlaw all radical groups with ties to terrorism, confiscate their money and deport non-U.S. citizens.

In the 1966 film, "Is Paris Burning?," a German agent during World War II is sent to the French capital with orders to set ablaze should the Allies enter the city. He refuses and as is liberated, a caller from asks, "Is Paris burning?"

In 2015, the answer is "not yet," but the match was lit years ago and the combustible material is everywhere, provided by aggressive and expanding radical Islam. What will , the rest of and the U.S. do to extinguish what has now become a flaming torch?