Welcome to the world of President Rand Paul 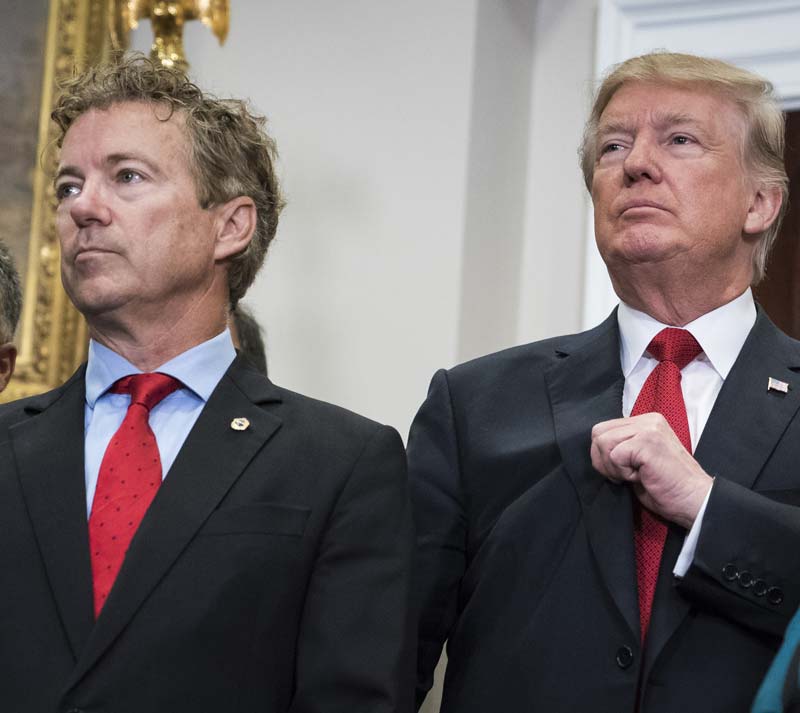 President Donald Trump's foreign policy follows no firm ideology but is often a combination of his long-held personal views and the influence of whoever currently has his ear. These days, Trump is listening more than ever to Sen. Rand Paul, R-Ky., who is quietly steering U.S. foreign policy in a new direction.

After Trump's abrupt decision to withdraw all U.S. troops from Syria - against the advice of his entire national security team - a stunned Washington establishment rushed to blame Turkish President Recep Tayyip Erdogan, who reportedly asked Trump to leave Syria in a Dec. 14 phone call. But Erdogan has made that request for years. What's changed recently is whom Trump is listening to back home.

Several U.S. officials and people who have spoken directly to Trump since his Syria decision tell me they believe that Paul's frequent phone conversations with Trump, wholly outside the policy process, are having an outsize influence on the president's recent foreign policy decisions. The two golf buddies certainly are sounding a lot alike recently.

Paul told CNN on Dec. 23 that he had talked to Trump about Syria and was "very proud of the president." That night on Twitter, Trump quoted Paul as saying, "It should not be the job of America to replace regimes around the world. .

. The generals still don't get the mistake." Speaking to U.S. troops on Wednesday in Iraq, Trump preached noninterventionism and bragged about denying his own generals six more months to fight the Islamic State in Syria before withdrawing. "America shouldn't be doing the fighting for every nation on Earth not being reimbursed," Trump said. "We're no longer the suckers, folks."

Criticizing past U.S. policy at a campaign rally is one thing. The commander in chief telling U.S. soldiers in a war zone that he has lost faith in their generals, and is therefore changing their mission, is another. Trump's Iraq trip moved U.S. foreign policy one big step in Paul's direction.

Officials told me that, throughout the national security bureaucracy, everyone is aware that Paul's voice is one to which the president is paying increasing attention. The existing concern over Paul's influence on Russia policy has now boiled over with respect to Syria.

Of course, there's nothing wrong with a senator advising the president on foreign policy. Hawks such as Sen. Tom Cotton, R-Ark., and Lindsey Graham, R-S.C., do it all the time. But the Trump-Paul bromance is troubling because Trump may be taking Paul's word over that of his own advisers. Moreover, Paul has a history of pushing false claims and theories, especially with regard to the Middle East.

Paul regularly says the GOP hawks "created" the Islamic State. In 2015, he apologized for repeating a debunked claim that Sen. John McCain, R-Ariz., had met with Islamic State members in Syria. Paul has said the United States could become the "air force for al-Qaida" in Syria, misrepresenting the cooperation between U.S. and local Syrian forces against the Islamic State. He doubts U.S. intelligence assessments that Bashar al-Assad gassed his own people.

To paraphrase Daniel Patrick Moynihan, Paul is entitled to his own opinions but not his own facts. If a senator the president trusts is feeding him bad information, that's a huge problem.

Fans of the president's Syria policy will argue that Trump and Paul are simply responding to the American people's war weariness after two decades of failed U.S. interventions in the Middle East. But the implications of Trump following Paul on foreign policy extend beyond Syria.

Trump has already decided to slash the U.S. troop presence in Afghanistan, which Paul has long pushed. Is South Korea next? Trump often says he wants to bring U.S. troops there home, too. Paul's idea is to swap out U.S. soldiers with Chinese troops, which would be a huge blow to U.S. leadership in Asia.

Walter Russell Mead wrote this week that Trump is choosing a Jeffersonian foreign policy (Paul) over a Jacksonian foreign policy (Cotton). But that ascribes too much consistency to Trump's decision-making. The foreign policy Trump touted during his campaign contained elements of both isolationism and internationalism, and he has shown he is capable of both.

In the run-up to 2020, Trump should realize that most Republicans - and most Americans - favor a robust U.S. foreign policy. Most voters recognize that worldwide threats to our country are growing and believe now is a time for American leadership, not American retreat.

In his resignation letter, Defense Secretary Jim Mattis suggested that Trump doesn't believe in traditional American foreign policy values and therefore should surround himself with advisers who share that view. In fact, Trump has often sought out a diversity of opinions. What he needs are experienced professionals with good information whom he actually trusts.

Trump's worldview is not predetermined. He's not a neocon or a hawk or a realist. Right now, he is listening to Paul because Paul is telling him what he wants to hear.

Hopefully, Trump will soon realize that adopting Paul's vision for the future of U.S. foreign policy is not only dangerous for our national security but bad politics, as well.