YOLO: You Only Live Once 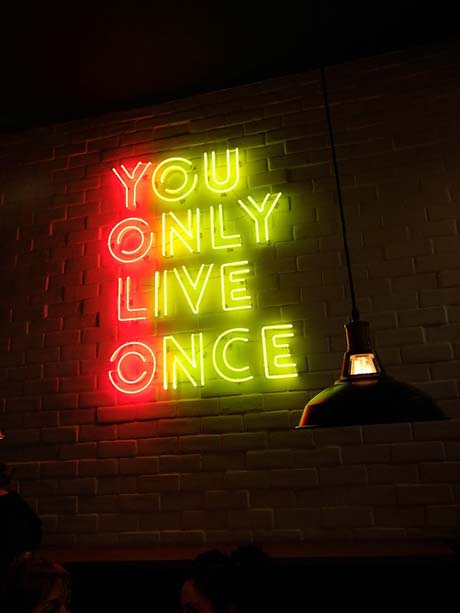 Kids say it all the time: YOLO. You Only Live Once.

It's the excuse they use when they want to do something silly, stupid or dangerous.

You can imagine how those all turned out. Not that I didn't do stupid stuff when I was a kid, it's just that I don't ever remember saying YOLO. I think we usually just said, "Watch this!" before each trip to the emergency room.

YOLO came along with all the other internet acronyms: LOL, BRB, IMHO and who knows what else.

It's something you expect from young people. But on a plane ride last week, I heard two women who were well into their golden years talking about their upcoming cruise, and one said, "My children say I'm spending their inheritance, but I say you only live once, and Bob and I are going to spend any time we have left enjoying it."


Even if we don't use those words, I think more and more older people are joining the YOLO movement. It is a puzzlement as to why the children of the woman I overheard would think YOLO is a good idea for themselves, but not for their parents. Isn't what's good for the goose, good for the gander?

A bigger question for those who have any money to pass along is: Why would you even think leaving money to your children is a good idea?

Sure, it's tradition, but what makes you believe it would make your children happier, better or wiser people?

Have you read a study that says it's a good idea? Is there a scientific paper that confirms it? Leaving money to your offspring seems like common sense, but so did the Domino Theory, not so very long ago.

We've all heard stories of great fortunes left to spoiled, unseasoned children who wasted it -- or worse, created great evil with their unearned wealth.

Most of us can name a family where money seemed to be a curse, not a blessing. The old TV show "The Millionaire" would show how receiving a million dollars, tax-free, seemed to wreck people's lives, not improve them.

Many successful people believe they are successful because they had tough, rocky, almost abusive childhoods. They wonder how their own children will learn the lessons they need to know if they spend all their money giving them a "perfect" childhood. Will they be tough enough? Will they be street-smart? Will they value hard work if they don't have to work?


Any college administrator can tell you stories about parents who will do anything for their kids: do their homework for them, write their admissions essay for them, make sure they never hit a bump in the road. It's almost hard to imagine a better way to raise an unsuccessful, unhappy adult who won't be able to afford therapy. It would almost be like your personal trainer saying, "The less you train, the stronger you'll be."

YOLO encourages bad choices and risky behavior. A better philosophy for an adventure-filled life would be the old phrase, "You'll be dead for a long time." It leaves plenty of room for saying "yes" to all kinds of learning and enjoyable experiences, yet it has a built-in warning about trying the truly dangerous stunts. It discourages speeding and cherry bombs, but allows for eating worms and going on cruises.

YOLO doesn't leave room for a next life; the other phrase simply encourages us to make the most of this one. Don't waste it. life. I can only tell you how; it's up to YOU to act on these surefire steps to absolute failure. Good luck!