Blowing up the Constitution 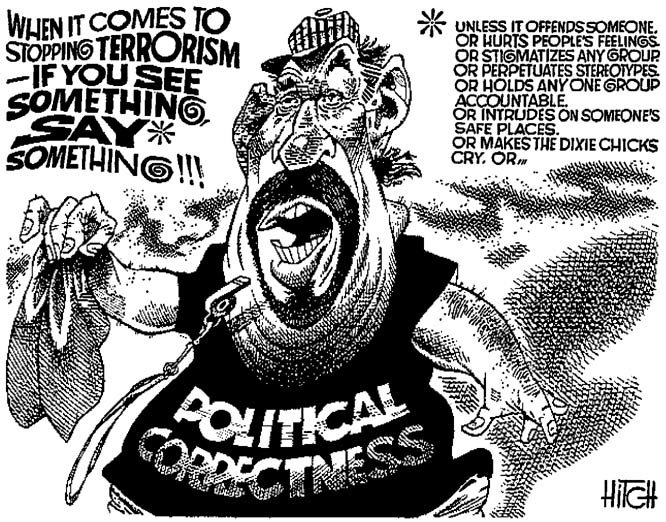 For the second time in two months, someone who has pledged allegiance to the Islamic State has plotted to kill innocents in New York City and has executed his plot.

According to police, at the height of the Monday morning rush hour this week, in an underground pedestrian walkway that I have used many times, in the middle of Manhattan, a permanent legal resident of the United States named Akayed Ullah detonated a bomb he had strapped to his torso in an effort to kill fellow commuters and disrupt massively life in New York.

The bomb was inartfully constructed, and it injured slightly four people nearby and Ullah himself seriously. He survived, was captured on the spot and is now in the joint custody of the New York Police Department and the FBI in the prison ward of Bellevue Hospital.

Ullah's wounds had barely been addressed by emergency room physicians when the calls began to resonate in the government and in the media to strip him of his constitutional rights and ship him to a military facility in South Carolina or at Guantanamo Bay, Cuba.

These voices argued without access to any evidence that because the Islamic State is a foreign power with an army that has sworn to do harm to Americans and destroy our way of life, its soldiers have no constitutional protections when they go about their destruction. Ullah is a soldier of this foreign army, this argument goes, and should be treated as a soldier under the Geneva Conventions. That means he should be removed from the civilian judicial system and interrogated and tried by the military.

This argument essentially suggests that the police in New York or the FBI or the president somehow possesses the lawful authority from some unstated source, before guilt has been adjudicated, to suspend Ullah's fundamental rights. This view of human liberty treats personal rights — even those guaranteed by the Constitution — as if they were gifts from the government offered in return for good behavior. Yet it defies history and the plain meaning of the Constitution.

Ullah's rights to legal counsel and to a jury trial are expressly guaranteed by the Constitution; hence, no government official, no matter how powerful or well-intended, can interfere with them. The right to counsel attaches whenever anyone is confined against his will, charged with a crime or interrogated by authorities — whichever occurs first. The right to a jury trial attaches whenever the government wants the life, liberty or property of any person. The constitutional language guarantees these rights to every "person" — not citizens, not Americans and not just good people.

In Ullah's case, the harm authorities say he caused occurred in the U.S. — while he was physically and lawfully in the U.S., where he was apprehended — so it is extremely unlikely that the crowd that denies the supremacy of the Constitution will get its way.

The failure to respect Ullah's rights because he has said he was inspired by a foreign power would commence a slippery and horrific slope, down which any person who is hated or feared or appears foreign or different or misunderstood at any given moment might be pushed.

As a practical matter, the NYPD and the FBI are far better at gathering evidence than the military, and federal prosecutors are far better at getting convictions than are their military counterparts. It is a Hollywood-infused myth that Guantanamo Bay produces results. It does not. Khalid Sheikh Mohammed has been waiting in Gitmo for 15 years for his military trial.

When voices in the government clamor for the removal of fundamental liberties, it is often to mask the government's own failures. I have argued for many years that government surveillance will turn us into East Germany — a modern-day totalitarian society that collapsed in 1989. I have also argued that surveillance doesn't work. The place in which the Monday explosion occurred is one of the most video-surveilled in New York. Do the police watch these videos in real time as was promised when the cameras were installed? They do not.

As well, Ullah's mobile phone recorded his whereabouts and communications prior to the explosion, also in real time, and the National Security Agency had all this, in real time. Did the NSA share it with the NYPD? It did not.

Some in government have asked what good the Constitution is if it fails to keep us safe. That is a bit silly, isn't it? The Constitution is a piece of paper on which is written the supreme law of the land. Its purpose was to establish the federal government and to limit all government. But it is only as valuable to personal freedom as is the fidelity to it of those in whose hands we repose it for safekeeping. If the people we have hired to preserve, protect and defend the Constitution can cut corners to get to bad people, what will protect us when they want to cut corners to get to the rest of us?

When President Abraham Lincoln cut constitutional corners during the Civil War, he was unanimously rebuffed by the Supreme Court. The case, Ex parte Milligan, involved a civilian whom the government sought to try in a military court. The high court wrote: "The Constitution of the United States is a law for rulers and people, equally in war and in peace, and covers with the shield of its protection all classes of men, at all times, and under all circumstances. No doctrine, involving more pernicious consequences, was ever invented by the wit of man than that any of its provisions can be suspended during any of the great exigencies of government. Such a doctrine leads directly to anarchy or despotism."

This danger of the mob's approving the curtailment of constitutional protections for unpopular monsters is as real today as it was after the Civil War. We must vigorously guard against it.