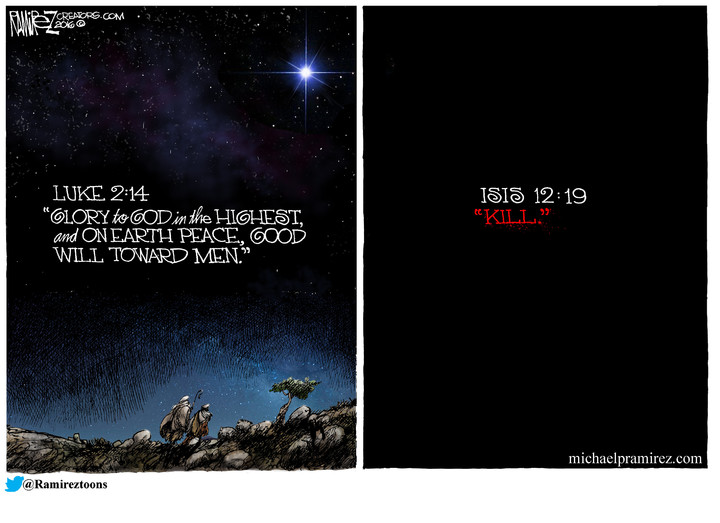 2016 hasn't been a hot year for discussions of a rhetorical war on Christmas in our malls or public schools. Maybe we've tuned out the secular hostility in our culture. We've gone from banning Linus reading from the Gospel of Luke to banning Christmas to banning Santa Claus to banning even the thought of a holiday, since it might not be for others.

But the deadly truck attack on a Christmas market in Berlin gives the phrase "war on Christmas" much more gravity and serves as the latest reminder that the secular media in what used to be called Western civilization has shown far too little concern for violent attacks on Christianity — the faith that created Western civilization. This newsroom yawn is inexcusable.

On March 4, the Associated Press reported, "Gunmen in southern Yemen on Friday stormed a retirement home run by a charity established by Mother Teresa, killing 16 people, including four Catholic nuns." There was no network coverage on ABC, CBS, NBC, PBS, NPR, CNN, MSNBC or Fox.

Pope Francis was right when he stated, "They were killed by their attackers, but also by the globalization of indifference."

On Aug. 10, a study released by Media Research Center Culture found that ABC, CBS and NBC mentioned the plight of Christians in the Middle East, Africa and South Asia in only 60 stories between January 2014 and June 2016, an average of just one story every two weeks across all three networks. The networks only called it genocide on six occasions and usually lumped Christians with Yazidis and Shiite Muslims as victims, echoing the Obama administration's reluctance to focus too directly on anti-Christian violence.

On that same day, the State Department released its International Religious Freedom Report in which it repeated Secretary of State John Kerry's designation — finally — of the Islamic State group as guilty of the genocide of Christians (and others). Still ABC, CBS and NBC reported nothing. These "news" outlets exploded at President-elect Donald Trump for saying anything insensitive about vetting Muslims. But they could care less that Christians are being massacred all over the Middle East.

Numbers tell the story. These networks devoted 14 minutes to a 2015 execution of 21 Coptic Christians by IS on a Libyan beach. But they offered six times as much attention — more than 88 minutes — to the execution of Harambe, a Cincinnati Zoo gorilla. In 2015 they obsessed for nearly 93 minutes on a Minnesota dentist shooting Cecil the lion on a hunting trip in Zimbabwe.

The war on Christmas is now a real security concern. Days before the successful Berlin truck attack, German officials claimed that a 12-year-old boy inspired by IS tried to set off dual bombs in a backpack near a Christmas market in the German city of Ludwigshafen. Christmas markets across Europe are on high alert. At Times Square and other holiday hotspots in New York City, tourists in Santa hats are taking pictures for social media, and members of the highly armed NYPD Hercules team have been deployed to intimidate and take down any potential terrorists.

Secularists have no moral right to be indifferent on this religious assault, much less treat Islam as the persecuted religion. Christians are deemed sinful if they don't love their fellow man without qualifiers; radical Muslims are deemed holy if they kill you if you're anything but one of them. How many more must be slaughtered for secularists to realize they are fighting the wrong religion?