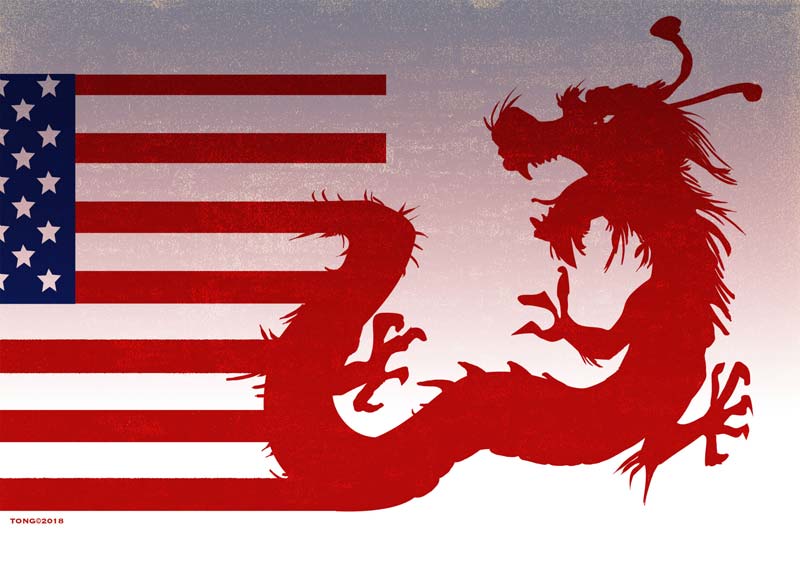 The Trump administration has now publicly unveiled its plan to fundamentally shift U.S. strategy toward China. It's an important acknowledgment that U.S.-China competition is heating up, an overdue admission that the past approach has failed and a national call to action. Vice President Mike Pence's landmark speech on U.S.-China relations on Thursday was notable for two reasons. First, it called out the Chinese government for perpetrating a multi-faceted, well-resourced and shady campaign of foreign influence operations on U.S. soil. Second, it placed that campaign in the context of a global competition between the United States and China that is being waged on every continent and in every realm. Set aside Pence's claim that the Chinese government is targeting President Donald Trump's political interests (which is true). The speech's real significance was its promise that the United States will newly confront Beijing's worldwide economic and strategic aggression, oppose its internal repression and compel the Chinese government to change its behavior on both fronts. "We will not relent until our relationship with China is grounded in fairness, reciprocity and respect for our sovereignty," Pence said, promising the Trump administration will "reset" the bilateral relationship in a fundamental way. The vice president laid out a litany of ways the Chinese Communist Party spreads influence inside the United States and around the world. Pence linked China's economic aggression, military adventurism, influence operations and authoritarian expansion to argue that Beijing long ago decided to abandon true cooperative engagement with the United States and therefore we must respond. "We want a constructive relationship with Beijing," he said. "While Beijing has been moving further away from this vision, China's leaders can still change course."

The speech is a culmination of nearly two years of work inside the Trump administration to identify, expose and confront increasing Chinese-government-sponsored efforts to interfere in all aspects of American public life, including politics, policy, academia and journalism. Pence correctly connected those efforts to Beijing's plans for economic and strategic expansion, which include unfair trade practices, debt-trap diplomacy in the developing world, economic espionage, and the exportation of an "Orwellian" social credit system that enforces censorship and compels loyalty to the Communist Party for all who seek access to China. Today, Trump will unveil a major study into vulnerabilities in the United States' defense-industrial base. I obtained an advance copy of the report, which found that our military is beholden to products from China, and Beijing has intentionally sought to undermine America's ability to control the resources crucial to building the weapons we rely on. "A key finding of this report is that China represents a significant and growing risk to the supply of materials deemed strategic and critical to U.S. national security," the report states. That was written before this week's revelation that the U.S. intelligence community believes the People's Liberation Army implanted tiny chips on components used by dozens of U.S. tech companies, the most significant known attack on the U.S. supply chain. The new China strategy merges the hawkishness of national security adviser John Bolton, the strategic positioning of Defense Secretary Jim Mattis, the economic nationalism of White House trade adviser Peter Navarro and Pence's values-based advocacy. It would have been unthinkable coming from the Obama administration. In fact, President Barack Obama's senior White House Asia official, Jeffrey Bader, now at the Brookings Institution, wrote last month that concern over the China threat in Washington was overblown and the approach of "disengagement" with China was wrongheaded. "Intensive engagement with China . . . is under attack by critics of U.S. policy who seek to disengage the two countries," he wrote, adding that "disengagement is almost certain to turn out to be a way station on the road to hostility."


That's a straw-man argument - because nobody is arguing for "disengagement." Rather, there's a growing consensus in Washington that Beijing's flouting of international rules and norms must end, and engagement must be based on a clear-eyed acknowledgment of Beijing's intentions and actions. There's no desire in the Trump administration to provoke a confrontation with China, a senior administration official told me, arguing that it's Beijing's activity that is causing the deterioration in the relationship. "The notion that this somehow represents disengagement is just dead wrong. It's the opposite," the official told me. "It's saying to the American people that we need to wake up to this. And the Chinese need to wake up to the fact that if they continue to pursue this policy - which is unacceptable - there will be consequences." Hoping China's rise would be constructive while ignoring Beijing's bad behavior didn't work. Opposing China's rise won't work either. This course correction in the U.S.-China relationship is absolutely necessary to protect American interests and values and must be carefully managed to avoid unintended consequences. Whether that causes undue friction or hostility between the United States and China is largely up to Beijing.