Dems and the lib media are afraid of Kanye West. What else explains their behavior? 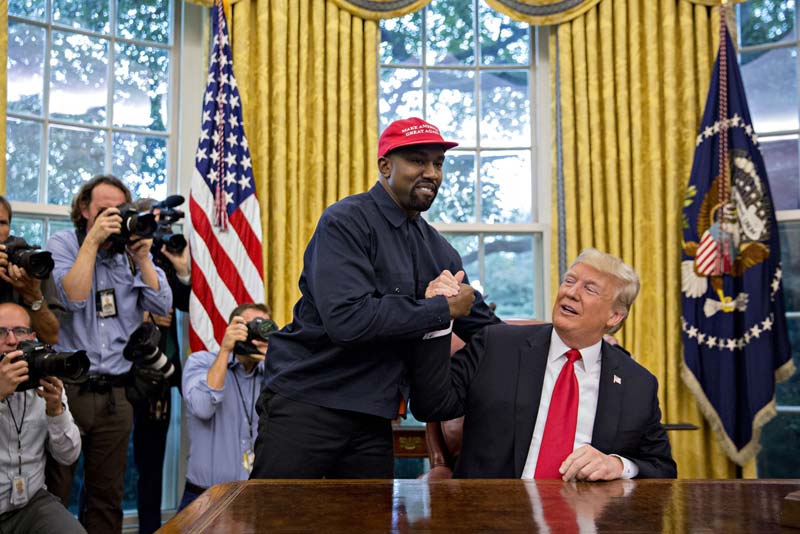 Has the bizarre relationship between President Donald Trump and Kanye West struck a nerve or what?

Rather than have the discipline to ignore this bromance, the tiresome Democrats and their phony leftist allies in the media have overreacted and given credibility where very little is due.

I've never been much of a West fan but the reaction to West befriending Trump has certainly got my attention. Democrats and their allies are quite literally having a fit that is making them tremble and sputter and say things that are inexcusable.

When thinking about why the left has reacted the way it did, it is important to remember that practically nothing West says is particularly insightful. In the Oval Office on Thursday, he actually said, "You are tasting a fine wine. It has multiple notes to it. . .You better play 4D chess with me like it's 'Minority Report.' Because it ain't that simple. It's complex."

But regardless of the effectiveness of West's precise words, he does represent something - and that something is frightening to Democrats. Heaven forbid a successful, independent, young African American with a huge social media following would get out of line and gleefully support Trump.

Watching the liberals panic has been kind of fun.

But if it's not the seriousness of what West says that riles Democrats. I guess it's just the fact that Democrats take issue with a black man saying something laudatory about the president. It is just more than they will allow. It's not that the left disagrees with West's ideas on prison reform - assuming he does have a comprehensible view - it's just that they just can't stand to see him embrace the president they loathe.

And certainly, in their minds, no African American should be given a pass for displaying any admiration for the president. This is a case of zero tolerance if there ever was one. What else could explain the media explosion over the Kanye-Trump relationship?

CNN's coverage was particularly hysterical, alarming and insulting. Rep. Jackie Speier, D-Calif., went so far as to question West's sanity for meeting with the president. "I felt like I was sitting in on a psychiatrist visit and a commercial for Donald Trump," she said. Eager to pile on, CNN host Don Lemon ranted against West on Thursday, saying he put on a "minstrel show" for the president, in essence questioning the legitimacy of West's blackness.

It is startling that they would choose to use such insulting words and innuendo that I thought had been purged from decent company. But perhaps decent company doesn't include Democrats or a lot of broadcast journalism anymore.

Anyway, West's meeting with the president could have been inconsequential. But Democrats and their allies in the media are clearly afraid of what it means to have a celebrity such as West come out and support the president. If Trump were smart, he would see this as a great opportunity and push back on the Democrats where they are weak. Trump, more than other Republican presidents, has a message to young black Americans.

As wild as it may seem, the fact that Trump has developed a cult of celebrity allows him to try things other Republican presidents never could. With West in tow, Trump could walk into the most impoverished neighborhoods in the country and ask a simple question that would push many Democrats and members of the traditional African American leadership out of their comfort zone.

I can see Trump arriving in the most blighted parts of Baltimore or Chicago and saying to the young people there: "Who do you think wants you to have a shot at getting rich, me or Bernie Sanders? Me or Elizabeth Warren? Me or Nancy Pelosi?"


The honest answer would be obvious: Trump. No one can say Trump doesn't want other people to get rich. He could go on to say: "The best thing you can do for your family, your community and yourself is to get rich - and I want there to be more black millionaires. Do you think the Democrats and the traditional African American political leadership want you to be a millionaire? Do Democrats really want you to have a shot at getting rich? Answer: Absolutely not." There is no evidence that Democrats want black Americans to get rich, which brings us back to West.

West is nothing if not independent. He doesn't need the approval of the Democratic establishment or the usual suspects among the liberal Hollywood elite. He is untethered from the traditional liberal gatekeepers in the same way Trump was untethered from the Republican establishment as a presidential candidate. There is a reason that the Democrats and their allies in the media insult, marginalize, ridicule and try to "Uncle Tom" West. It is obvious they are afraid of him and the discussion he might start.

All of this kind of reminds me of the infamous 2009 "beer summit" when President Barack Obama convened a Harvard professor and Cambridge police officer to discuss race relations and racial profiling. But that gathering accomplished nothing aside from providing the media with a feeding frenzy of contrived coverage. So if Obama could have his beer summit to do nothing, Trump and West can meet in order to stir the pot and see what happens. This will be interesting to watch.

I hope the Trump and Kanye show continues.