Will the Blue Wave collapse before it reaches the shore? 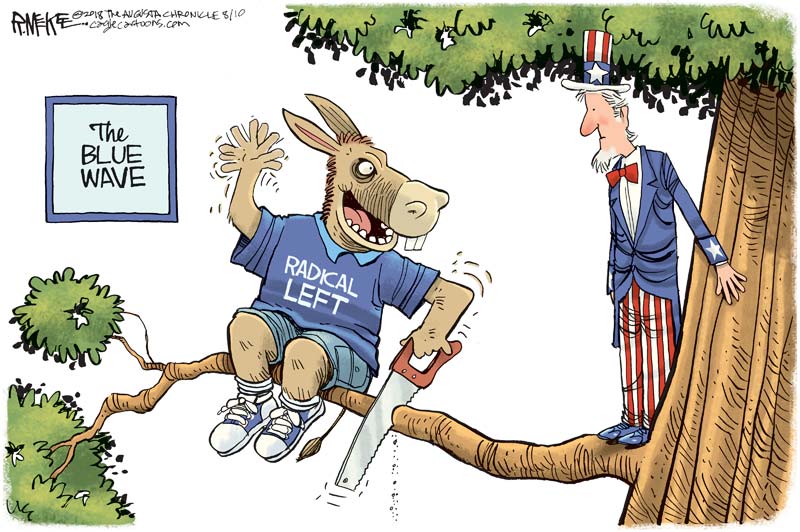 One can only assume that in the Kavanaugh home, there's a horseshoe over every door, a rabbit's foot in every pocket and a lawn entirely planted with four-leaf clover. There were half a dozen times during Brett Kavanaugh's Supreme Court nomination battle when most experts were certain he'd have to be withdrawn. Republicans already faced a likely Democratic wave in the midterms, and standing by Kavanaugh would all but concede not only the House but also possibly the Senate.

Yet somehow he was confirmed. And his party's luck is even more astonishing. Far from turning the Blue Wave into an Indigo Tsunami, the Kavanaugh fight seems to have produced a Red Undertow. As of this writing, that backwash looks strong enough to check Democratic advances in the Senate and maybe even gain a couple of seats. If Republicans are very lucky, they might even retain control of the House.

The GOP shouldn't be too surprised at such turns, given its hard schooling in 2016 about the limits of establishment expertise. But Democrats have so far avoided taking similar lessons. Hillary Clinton's defeat could be explained by historical accidents instead. The party settled on a comforting narrative: Russian interference in the election, and an untimely FBI announcement about Clinton's illegal email server, had combined with the archaic electoral college to hand Donald Trump a narrow win despite his losing the popular vote. Bad luck, of course, but not much to be learned except that sometimes life is unfair.

The past few weeks can't be explained away so easily. It's virtually certain that whoever leaked Christine Blasey Ford's allegations about Kavanaugh thought they were doing Democrats a good political turn. And "structural unfairness" of the political system can't explain why voters who previously told pollsters they were leaning Democratic before the Kavanaugh process now seem to have taken a right turn.


If the Blue Wave collapses before it hits shore, Democrats may need to ask whether #MeToo and other forms of identity politics are really the wave of the Democratic future.

Democrats have been waiting for that wave to crest for a long time, at least since the 2002 publication of "The Emerging Democratic Majority" by John Judis and Ruy Teixeira. That book's modest thesis suggested that demographic trends would increase traditional Democratic constituencies while slowly shrinking the GOP's base, as long as Democrats could find a way to hold their then-current coalition together.

By 2016, many saw that as prophecy: All they needed to do was wait for the GOP's atavistic denizens to die off, leaving the country to those on the right side of history.

Yet salvation keeps failing to arrive. We now have the most diverse electorate in American history. If the strong version of the EDM thesis were correct, not even gerrymandering, voter suppression and untimely FBI announcements would have handed Republicans enough power to tip the electoral college in their favor. The prophecy failed. And still, a whole lot of folks seem to be waiting for history to vindicate them.

A quick glance at actual history shows that it doesn't have a "right side" where Democrats can dwell; it doesn't mechanically hand out power to the morally superior, or to the smartest, or to those with the best manners. Elections are won by those who assemble the biggest coalition of citizens to deliver votes where they're needed. After 2016, but especially after Kavanaugh, Democrats should be asking whether an increasing focus on identity politics is actually enlarging their coalition. The more explicitly you target specific identities, the more likely you are to alienate the identities against which they're implicitly framed. As Nate Cohn of the New York Times wrote in 2016, one way to think about Trump's victory was that white working-class people started voting like a minority group - and were 40 percent of the electorate. And one way to think about the Red Undertow is that while women make up half the electorate, so do men. If something runs up the women's vote but threatens the other half of the country, it's likely to be at best an electoral wash. Or worse, if some of the women in the electorate think of their brothers and fathers, husbands and sons, whose fortunes are inextricably tied to their own.