Bolton lost the latest Trump administration factional battle, but not the last 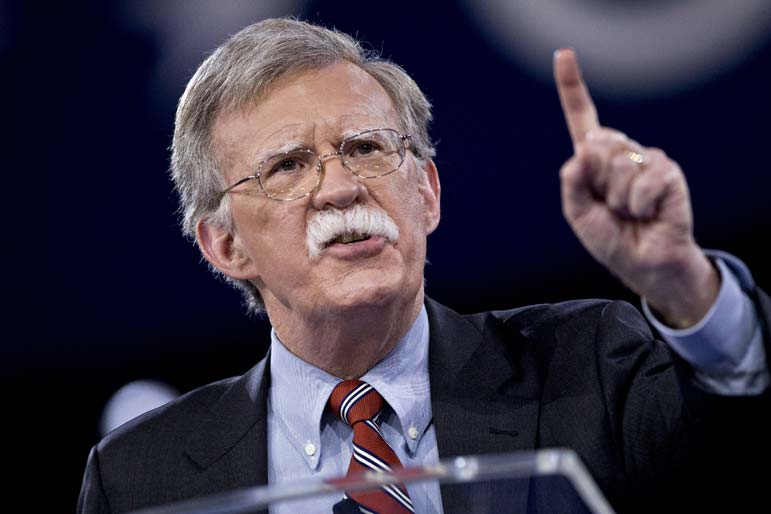 In every administration - but especially in the Trump administration - personalities are policy and internal factions form assorted alliances to exert influence and maintain power. John Bolton's long-anticipated departure from the job of national security adviser came when his faction lost all its allies. He was fighting too many battles on too many fronts.

Of course, Bolton's principal problem was that he had lost the trust and confidence of his boss, President Donald Trump. But foreign policy differences were just one reason. "There were not bad deals when John Bolton was national security adviser," a source close to Bolton told me Tuesday, claiming Bolton resigned while standing up for his famously hawkish foreign policy principles.

It's true Bolton opposed the president's dealmaking efforts on Afghanistan, North Korea and Iran. But as several reports Tuesday explained, Trump became convinced Bolton had moved from simply opposing his agenda to actively undermining it, primarily by leaking. Trump came to that belief with the determined help of many inside and outside the administration waging a not-subtle campaign to sour the president on Bolton, primarily by leaking.

What's remarkable is that so many factions went on the record to reveal their internal disputes. Bolton kicked that off by tweeting openly that he resigned of his own initiative, contradicting Trump's tweet that Bolton was fired. White House press secretary Stephanie Grisham then went on the record, texting with reporters that Bolton was lying. Bolton then texted reporters that Grisham was lying.

Bolton and Grisham's mutual dislike is not new. In her previous post as Melania Trump's press secretary, Grisham was instrumental in the public humiliation of Bolton's former deputy Mira Ricardel, which also involved mutual accusations of leaking. Grisham's ascendancy to the top White House communications role was always a bad sign for Team Bolton. The Trump family faction is destined to outlast any other.

Bolton's long-simmering feud with Secretary of State Mike Pompeo and his team also spilled out into plain view when Pompeo confirmed that they disagreed on many issues, contradicting his previously routine claims that the administration was unified. It's true Bolton thought Pompeo's North Korea diplomacy was counterproductive, and he wanted to take an even harder line than the State Department on Iran.

But Tuesday, Pompeo seemed to reveal his own personal view that Bolton was working against Trump's agenda. Trump "should have people that he trusts and values and whose efforts and judgments benefit him in delivering American foreign policy," Pompeo said at a sanctions-related news conference Bolton had been scheduled to attend. "That's what, as Cabinet members, [Treasury] Secretary [Steven] Mnuchin and I try to do each and every day."

A year ago, Pompeo and Bolton, both conservative hawks, were aligned, and Mnuchin was the outlier. Now, the tables have turned and Pompeo and Mnuchin jointly celebrated Bolton's ouster.

"The president's view of the Iraq War and Ambassador Bolton's was very different. The president has made that very clear," Mnuchin volunteered for no reason.

Another faction Bolton was battling was that of acting chief of staff Mick Mulvaney. Mulvaney's deputy for national security, Rob Blair, and Bolton have been feuding. "Mulvaney and Bolton are barely on speaking terms, and Blair has regularly challenged Bolton's subordinates," The Post reported in July. Again, there was a mix of policy and personality disputes. Again, each side accused the other of leaking.

Team Bolton lost an ally when acting defense secretary Patrick Shanahan resigned mid-confirmation process in June after details emerged about his family's troubled history. Bolton had been a big Shanahan supporter. It was Ricardel who brought her former Boeing colleague Shanahan into the administration in the first place.

Meanwhile, pro-MAGA lawmakers, pundits and Trump buddies have been attacking Bolton for months by repeatedly getting in Trump's ear with accusations. Some close to the president always believed that Trump's campaign agenda required the defeat of establishment GOP types like Bolton.

The final straw might have come when Bolton's last ally, Vice President Mike Pence, got caught up in Bolton's various internal beefs. Pence and Bolton have been quietly close, but Pence plays a much more cautious and disciplined game. The New York Times reported Pence's team was angry that Pence was named in news reports with Bolton as opposing Trump's plan to invite Taliban leaders to Camp David.

"Both Mr. Trump and Mr. Pence publicly denied the reports, and some White House officials said they believed it was the last straw for the president," according to the Times. This is a leak about a leak.

Bolton is not innocent: His team just got outgunned, outmaneuvered and out-leaked. It was inevitable. Anticipating this outcome, Bolton had been telling people for months he intended to leave by the end of the year. The Afghanistan Camp David mess seems to have sped that up. Bolton will leave with a record of some policy wins and some losses - from his perspective, more wins than if he hadn't had the job at all.

Republicans on Capitol Hill lost a key interlocutor and a key ally inside the White House. Many fear Trump will replace Bolton with someone who will feed Trump's own desire to drastically pull back on U.S. commitments and alliances abroad. Even Democrats acknowledge Bolton was somebody who they knew and trusted to - at the very least - push back against Trump's worst instincts or false beliefs.

As Senate Foreign Relations Committee ranking Democrat Robert Menendez of New Jersey told CNN's Jake Tapper, "He was a voice that would give alternative realities, or [rather], real realities, to the president."

In the end, pushing Bolton out the door was something that brought all the other factions in Trump World together. But don't expect that to last long. Trump said he will choose his new national security adviser next week.