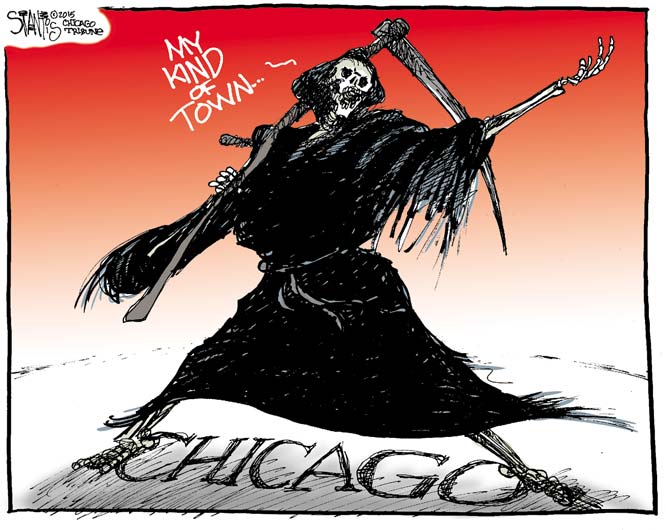 It's never any fun being a budget hawk. You are the chaperon at the high school dance, the seat-belt nanny on the roller coaster, the diet option on the menu at the Cheesecake Factory. No one likes you, and it shows.

So why do they keep at it? Well, because it's even less fun being the mayor of someplace like Chicago.

Lori Lightfoot, Chicago's new mayor, is a historic figure -- the first black woman to run one of America's biggest cities. She took office in May and just gave her first "State of the City" address this week. The coverage of that address focused not on the historic moment, but on the $838 million deficit she forecast for the coming year.

This in the middle of a long economic boom during which Chicago property values have increased, often dramatically, and young, affluent people have flooded the city. Throw in a recession sometime in the next couple of years, and Chicago is going to be in a full-blown crisis.

This situation obviously can't be blamed on a mayor who's only been in office for a few months. But it's not even exactly the fault of Rahm Emmanuel, her predecessor, who actually did a fair amount to stabilize what used to be an even more dire financial situation.

Rather, it's the fault of generations of politicians before them who promised an ever-richer array of benefits to government workers. Particularly, they liked to raise the retirement benefits.

There's nothing inherently wrong with paying generous pensions. But that sort of compensation is actually quite expensive. In order to fund even a modest guaranteed pension benefit decades in the future, you have to invest a big chunk of money in assets right now. Over time, those assets will grow, and generate the cash to pay out the benefits you've promised --

Oh, ho, ho, ho. Pay for the pensions? No, we have to stop; some politician might be reading this, and they could really hurt themselves laughing too hard. The whole point of giving workers pension benefits instead of cash was that you didn't have to pay for them; you could promise the benefits now and gather up the votes that the grateful workers tossed at your feet, all without costing current taxpayers a single dime.

Future taxpayers, you say? This is why no one likes budget scolds. Future taxpayers mostly weren't voting in 1982 municipal elections. Besides, they'd probably all be so rich from their flying cars that they wouldn't miss a little extra pension money. And if not? Well, that was a problem for later, when the politicians would be out of office.

Chicagoans, welcome to "later." The municipal pensions only have about 25% of the assets they'll need to cover projected benefits, a shortfall of roughly $28 billion. And that's according to the city's rather optimistic estimates. If you use a more cautious method, you come up with a shortfall of more than $40 billion. This is one reason that Moody's Investor Service rates the city's general obligation debt as junk bonds.

It's been obvious for decades what was going to happen to Chicago and also obvious what would have to be done about it: some combination of pension trims, spending cuts and tax increases. But that's budget-scold math. The political arithmetic was much simpler: Everyone thought that 100% of the cost ought to be borne by someone else.


And so, with each delay, the problem got worse as Chicago politicians borrowed even more money from the future to keep taxpayers and workers happy right now.

Compound interest is your friend when you're saving and your mortal enemy when you're borrowing. Chicago is now approaching the point where the growth of their obligations will outpace the growth of any possible revenue stream they might use to cover them. It's a few steps from there to municipal bankruptcy.

The United States, like Chicago, hasn't run a budget surplus since 2002. We're currently headed for a deficit of nearly $1 trillion in a boom economy -- thanks to Democrats who refuse to cut spending, and Republicans who refuse to raise taxes, and an electorate that seems curiously unworried by the increasingly parlous finances of Medicare and Social Security.

No, Chicago politicians are only the current, most vivid example of where we'll all eventually end up when "later" becomes "now." And when we get there, we'll probably wish we'd listened to the budget hawks a little sooner.