Kavanaugh has a doppelganger --- no, not that one 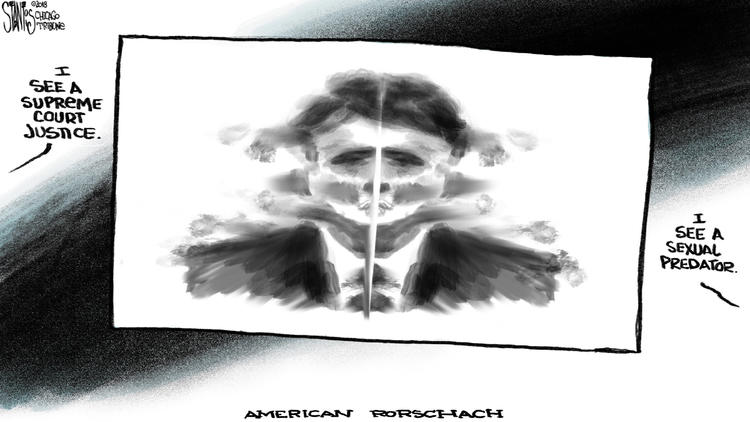 In all the novelistic twists of Brett Kavanaugh's nomination to the Supreme Court, the theory that Kavanaugh may have a doppelganger is the most astonishing by far. On Thursday night, Ed Whelan, a conservative lawyer who is the president of the Ethics and Public Policy Center and known to be close to Kavanaugh, unveiled an elaborate theory in a series of tweets suggesting that one of Kavanaugh's high school classmates, now a middle school teacher in Georgia, may have been the person who allegedly attempted to rape Christine Blasey Ford during an alcohol-fueled gathering in suburban Maryland in the early 1980s.

A firestorm of jeers and outrage ensued. Why would Whelan rope an ordinary citizen, by name, into this increasingly radioactive matter? Even Whelan seems to regret it; on Friday morning he took down the tweet and apologized for his "appalling and inexcusable mistake of judgment."

Certainly Twitter was the wrong place to air such a theories. Yet a misidentification cannot be ruled out entirely; such mistakes do happen. My Washington Post colleague Elizabeth Bruenig just published a brilliant and shattering account of an alleged acquaintance rape that took place in her hometown, in which believing the victim (for the record: I do) also probably entails believing that she somehow misidentified one of her two attackers in the immediate aftermath of a harrowing attack. Given the vagaries of memory and time, such a misidentification is at least possible in the case of Kavanaugh and Ford, especially now that the fourth witness, a lifelong friend of Ford's, has said not merely that she doesn't remember the party in question but that she has no recollection of ever having met Kavanaugh.

But if a doppelganger theory is really too incredible to entertain, why do so many people seem so eager to make Kavanaugh serve as a universal body double for sexual predators who resemble him in some way?


Shortly after The Post unveiled Ford's identity and her story on Sept. 16, Emily Peck wrote in HuffPost: "If Brett Kavanaugh makes it through the nomination process and takes his place on the Supreme Court despite being accused of sexual assault, the message to the country will be clear: Women don't matter quite as much as men." Only accused? Doesn't it matter whether the accusation is true, or at least how plausible it is?

Meanwhile, the Atlantic's Caitlin Flanagan seemed to imply that her faith in Ford's account was bolstered by her own experience with sexual assault in high school at the hands of a senior athlete. A letter made the rounds from alumnae of Ford's high school who had no direct knowledge of what Kavanaugh may have done to Ford - some of the signatories hadn't been born when he graduated from Georgetown Preparatory School - but proclaimed that prep-school boys do things like this all the time. And for a week, my social media feeds have been clogged with echoes of these arguments.

As a prep-school graduate myself, let me first say: Oh, yes, the boys certainly do. But the question before us is what this particular prep-school boy might have done.

Once you acknowledge that a misidentification or a brutal attack is well within the realm of possibility, you have to concentrate on this attack, on this identification, on the two human beings before us, thrust into a harrowing public confrontation that neither of them wanted.

Ford isn't merely the avatar of every feminist or Democrat who ever angered conservatives. She's a person who, as best I can tell, sincerely believes that she was grievously wronged by a man who now proposes to sit in judgment on our most important moral and legal questions. She doesn't deserve the shameful abuse she has suffered from partisans too blinded by their anger to see the person they're wronging.

But likewise, Kavanaugh isn't the doppelganger of every prep-school predator or fraternity rapist. He isn't a stand-in for every privileged white man who ever got away with something he shouldn't have; he is not the distilled essence of the patriarchy. He's an individual, not a stock character, one accused of a very specific act.

In assessing whether Kavanaugh is guilty of that act, we of course consider his character. But we should not automatically ascribe to him the character of other white men, prep-school boys, high-school athletes, fraternity brothers, Catholics, pro-lifers, conservatives or lawyers we have known.

No good cause, however just, requires the ritual scapegoating of members of a despised class as an atonement for the sins of the others. Women or men, Democrats or Republicans, we're all Americans, and I'd still like to believe America is better than that.