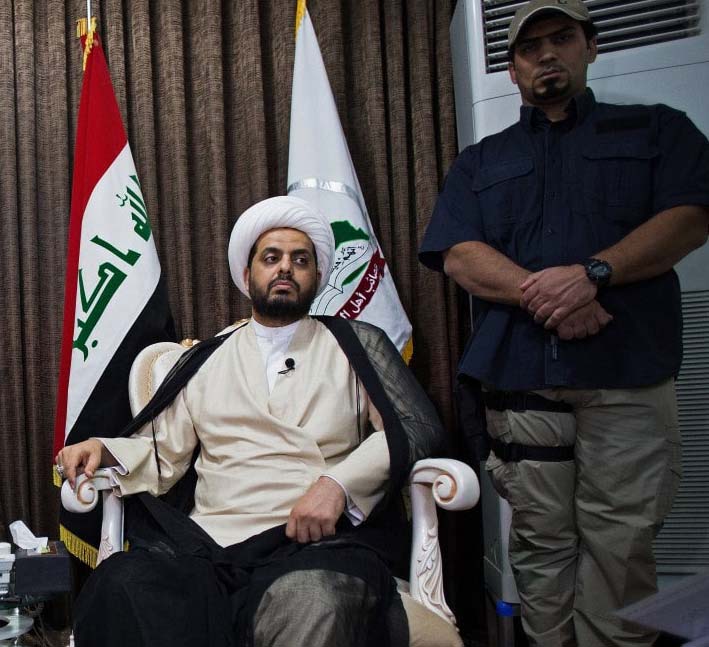 Qais al-Khazali, the leader of Asaib Ahl al-Haq. A bodyguard stands beside him. Washington Post photo by Max Becherer

A decade ago, a captive Iraqi terrorist leader told his U.S. interrogators all about how Shiite militias worked with Iran, Hezbollah and one another to attack American soldiers in Iraq. Now, as that terrorist is set to wield significant political power in Iraq, the details of his interrogations are being released for the first time.

It has long been known that Qais al-Khazali, the leader of the Asaib Ahl al-Haq (AAH) militia, had close ties to Iran and Hezbollah as he waged his long fight against U.S. troops in Iraq. But the extent to which he worked with the Americans who detained him in 2007 - selling out his Iranian paymasters and turning on his Shiite militia allies - is shocking.

U.S. Central Command recently declassified dozens of Khazali's interrogation reports as part of a project to document the history of the Iraq War, and the American Enterprise Institute has now published all of them on its website.

"You read these reports and you see what a vicious terrorist Qais al-Khazali is, how deeply entwined he is in Iran's anti-American covert network, how much American blood he has on his own hands, and then you turn around and realize that this guy is probably about to be a minister in the Iraqi government," said Kenneth Pollack, resident scholar at AEI. "It makes you realize how far Iraq has fallen, and how badly we have handled Iraq in recent years."

Khazali's past crimes are newly relevant because he has emerged as a critical player in the ongoing formation of the new Iraqi government. Somehow, his AAH militia group gained control of 15 seats in the Iraqi parliament after May elections that many observers saw as rife with rigging, bribery and intimidation. Khazali will now sit in Iraq's parliament. He could even take a leadership position in the government soon.

Khazali's cooperation with Iran and Hezbollah is also ongoing. A video emerged in December showing that he had traveled to the Lebanese-Israeli border and threatened attacks on Israel. He threatened violence against U.S. troops in Iraq as recently as February. In May, the House of Representatives passed legislation authorizing President Trump to sanction AAH. But the Trump administration has not used its sanctions power - part of its overall failure to confront Shiite militias and their malign influence in Iraq.

"President Trump's officials have insisted that they are going to push back on Iran throughout the Middle East, so that the Iranians can't threaten America's allies or its citizens - something these reports make clear that they have been doing with impunity for years," Pollack said. "Yet one of their main proxies is now a kingmaker, and possibly soon a cabinet minister, in the Iraqi government."

Just days after being captured by U.S. forces in 2007, Khazali started spilling information about Iran's activities in Iraq; his fallout with his former boss, Moqtada al-Sadr; and details of how other Shiite militias in Iraq at the time organized, financed and coordinated their attacks on Americans. Khazali was a key conduit between the Sadr organization and Iranian leaders until he had a dispute with Sadr and struck out on his own.

Almost immediately after being detained, Khazali began giving up information about the armed groups he controlled and the people he worked with. He named his lieutenant and told interrogators where he lived. He identified many more Shiite militia leaders and commanders from photographs supplied by the Americans. He offered information even on his driver.

Khazali provided extensive information on Iran's financing of Shiite militias and their violence in Iraq, including Iran's production and distribution of explosively formed penetrator (EFP) bombs, which killed hundreds of Americans. He described multiple trips to Tehran after the fall of Saddam Hussein in 2003 to set up secret funding and training schemes. He detailed his meetings with then-Iranian President Ali Akbar Hashemi Rafsanjani, Ayatollah Ali Khamenei and Maj. Gen. Qassem Suleimani, commander of the Quds Force of the Iraq Revolutionary Guard Corps.

Khazali also admitted to killing Americans. Five U.S. soldiers were kidnapped and then murdered when Iraqi militiamen dressed in U.S. military uniforms attacked a U.S.-Iraqi coordination center in the southern Shiite city of Karbala in January 2007. U.S. spy satellites later discovered a mock-up of the building inside Iran that was used for training.

Khazali admitted authorizing the attack and named the commander under him who carried it out. He claimed the original goal of the attack was to capture American hostages and force a trade. He also admitted to AAH's role in many other deadly attacks on coalition forces.


Much of the intelligence Khazali provided was on Sadr and his organization. But he also gave interrogators juicy information on other militias supported by Iran, including Jaish al-Mahdi and the Badr Organization. He also named several operatives of Lebanese Hezbollah and Iraqi "Special Groups" to show interrogators how much he was cooperating with them.

"In some ways, it is surprising that Khazali is still alive given the amount of information he provided the coalition," said Pollack. "This information no doubt led to numerous arrests and deaths of other Shia terrorists."

U.S. forces released Khazali in 2009 in a prisoner swap. President Barack Obama pulled U.S. troops out of Iraq in 2011. In 2014, the Islamic State took over huge swaths of Iraq and threatened to march on Baghdad. Without American troops to support it, the Iraqi government turned to the Iranian-supported militias, including AAH. Now, four years later, those militias and their leaders are primed to capitalize politically.

What can the United States do about it now? In Iraq, perhaps not much. But Khazali's return to prominence is not just an Iraqi issue. He is a key player in the Iranian scheme to subjugate Syria, threaten Israel and thwart the United States. It's well past time for the United States to confront Iran's use of proxies - including Khazali - to spread misery throughout the Middle East.