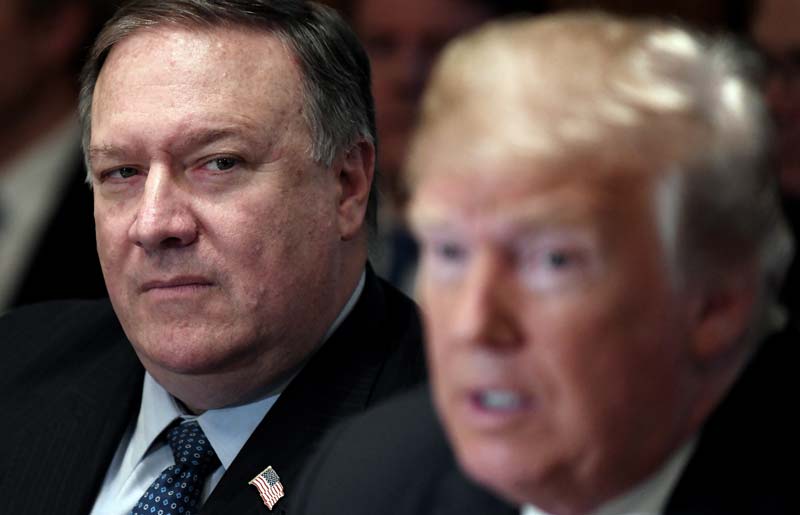 Last Thursday, Secretary of State Mike Pompeo announced he was departing on his fourth trip to Pyongyang. On Friday, just hours before Pompeo was supposed to leave, President Donald Trump tweeted that the trip was off. The cancellation came after a top North Korean official sent a secret letter to Pompeo that convinced both he and Trump the visit was not likely to succeed.

Pompeo received the letter from Kim Yong Chol, vice chairman of North Korea's ruling Workers' Party Central Committee, on Friday morning, and showed it to Trump in the White House, two senior administration officials confirmed. The exact contents of the message are unclear, but it was sufficiently belligerent that Trump and Pompeo decided to call off Pompeo's journey, where he was set to introduce his newly announced special envoy, Stephen Biegun, to his North Korean counterparts.

White House Press Secretary Sarah Huckabee Sanders told CNN that Pompeo was in the room Friday afternoon when Trump tweeted he was canceling Pompeo's trip because Trump felt "we are not making sufficient progress with respect to the denuclearization of the Korean Peninsula." Reporters also spotted Andrew Kim, a top CIA Asia official who has traveled with Pompeo to Pyongyang, heading into the West Wing on Friday.

Officials also declined to say how the letter was transmitted, but North Korea has been increasingly communicating through its U.N. mission, known as the "New York Channel." Privately, Trump and Kim Jong Un have been exchanging a series of letters, some couriered by Pompeo himself. Trump's latest letter, which North Korea has now responded to, encouraged the Kim regime to make more progress on denuclearization while warning against further backsliding.

In his Friday tweets, Trump also blamed the Chinese government for North Korea's lack of cooperation. But the fact that Trump acknowledged publicly the talks were not going well was a huge reversal for the president. He and Pompeo have repeatedly claimed progress was being made.

Trump isn't expected to totally abandon the diplomacy he began in his June 12 Singapore summit with Kim Jong Un. But unless Pyongyang responds positively to his latest move, Trump could side with officials who want to apply more pressure to the Kim regime through increased sanctions or other means, including national security adviser John Bolton.

"I don't know that the president would ever admit that it's over," one senior administration said. "But if the North Koreans don't move the ball forward, Bolton will argue to Trump, 'You don't have to admit you were wrong, but we need to start escalating against them to force them to keep their commitments.'"

Bolton and Defense Secretary Jim Mattis are opposed to Trump issuing a declaration of the end of the Korean War at this time, several officials said. They both believe that North Korea should go first, and that any declaration from Pyongyang should be verified before the United States grants further concessions. Bolton was not in the room when Trump posted his tweets, but he was opposed to the trip from the start.

Bolton believes any concessions, including face-to-face meetings, are seen by the North Koreans as signs of weakness and are therefore unhelpful. Mattis believes that issuing such a declaration without thinking through all implications could negatively impact U.S.-South Korean military preparedness on the peninsula. The State Department argues that the declaration is only a political step, far short of a peace treaty, which would come much later.

Meanwhile, there's a contentious interagency debate over what exactly North Korea is currently doing with its nuclear and missile programs. There's no single U.S. government assessment, so different U.S. agencies have different takes on how aggressively North Korea is backsliding, and even over what metrics should be used to evaluate the lack of progress.


There's also rising concern inside the Trump administration that the South Korean government of Moon Jae-in is increasingly willing to go it alone, further deepening its dĂ©tente with Pyongyang regardless of whether Washington approves. Moon is planning a visit to Pyongyang next month. His government is considering opening up a representative office there, along with other new cooperation efforts.

"We have a big problem coming with South Korea," a senior official involved in the talks told Stanford University's Daniel Sneider. "It has reached the point where the South Koreans are determined to press ahead. They no longer feel the need to act in parallel with us."

State Department, Pentagon and National Security Council spokespersons all declined to comment. Privately, several officials told me they consider the entire North Korea diplomatic engagement a low-probability effort because they doubt Kim Jong Un has actually made the decision to denuclearize. But there's broad agreement that this effort should continue until proven futile, considering the alternatives.

Joel Wit, a former North Korea nuclear negotiator, said that the Trump administration should not tank possible progress over issues like sequencing, but rather should let Pompeo, Biegun and their team get to work hammering out a deal.

"We should be negotiating on a sustained basis and have Pompeo ready to roll when his involvement is necessary," he said. "This whole thing about who goes first is silly. We want them to go first, they want us to go first, and somewhere in between we both go."

If Pompeo and Biegun aren't able to show Trump they can make progress, in the coming weeks the president may approve a much tougher stance that risks escalating tensions with both Pyongyang and Seoul. But right now, it's up to Kim Jong Un to make the next move.