Don't be duped on North Korea 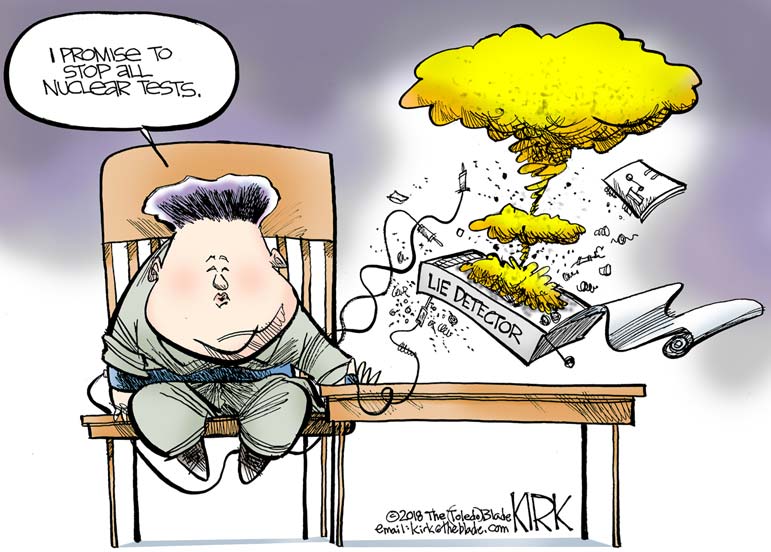 For the first time in 13 years, the United States may soon send teams into North Korea to search for remains of U.S. soldiers killed during the Korean War. That's encouraging news for the families of many long-lost loved ones, but we must not mistake that as real progress toward the far more important security goal: denuclearization.

North Korean officials confirmed to Secretary of State Mike Pompeo last month that they want to resume joint recovery operations north of the demilitarized zone. Bringing back U.S. soldiers' remains is a worthy endeavor in its own right and could result in the identification of hundreds of missing Americans, giving their families closure. As a nation, we commit to those who serve that we will not leave anyone behind enemy lines, alive or dead.

But Trump administration claims that recovering remains represents progress in the nuclear talks are incorrect. National security adviser John Bolton said only last week that North Korea has made no progress on denuclearization. Then, on Tuesday, State Department spokeswoman Heather Nauert pointed to the unilateral return of 55 boxes of remains from North Korea at the end of July as evidence of forward movement.

"Well, I think we have certainly seen progress so far. We've seen the remains of service members brought home," she said when asked about the denuclearization talks. "That is certainly a step in the right direction."

President Donald Trump often brings up the remains issue to divert attention from the lack of progress in the nuclear talks, sometimes inflating the numbers. Trump says he asked Kim Jong Un to return soldiers' remains at their Singapore summit in June, and he points to Kim's favorable response as evidence the North Korean leader is sincere.

Pentagon officials, speaking at the White House on Tuesday, said recovery operations are not connected to the nuclear negotiations, as far as they are concerned.

"It could be drawn into the greater geopolitical stream," said Kelly McKeague, director of the Defense POW/MIA Accounting Agency. "But for now, we're treating it as a military-to-military contact, but more importantly, as a humanitarian endeavor that's separate and distinct from anything else."

Officials who worked on the recovery operations inside North Korea from 1996 to 2005 said they fought hard to keep the remains-recovery issue separate from nuclear diplomacy for a good reason: North Korea treats them completely differently.

"Progress on one doesn't speak to progress on the other, and vice versa," said Ashton Ormes, a former Pentagon official and negotiator with North Korea over remains recovery.

If Pyongyang's game is to draw out the diplomatic process and pocket concessions without ever moving to denuclearize, the remains-recovery issue fits their purposes perfectly. It gives Trump political space while the Kim regime and the South Korean government try to persuade him to declare an end to the Korean War.

Remains-recovery operations are also a cash machine for Pyongyang. Then- Defense Secretary Donald Rumsfeld cited security concerns in canceling the program in 2005,but officials involved said he also didn't want to give more money to the Korean People's Army.

"A very clear incentive for [North Korea] to do these operations is to try to get hard currency for the KPA," said Victor Cha, a senior White House official during the George W. Bush administration. "It's not a signal at all that they are interested in denuclearization."

From 1996 through 2005, the United States and North Korea conducted 33 joint missions north of the demilitarized zone that resulted in collecting 229 sets of remains, 67 percent of which were eventually identified. Officially, the Pentagon gave North Korea almost $20 million during those missions as reimbursement for security and logistics. Several people involved told me that the actual number was much higher because the North Koreans abused the program to extract various other payments.

There's also evidence the recovery missions are often staged by Pyongyang. An internal Pentagon reportfound that U.S. officials were deceived into digging up remains that the North Koreans took out of storage and planted at former battle sites, a practice known as "salting" recovery sites.

By playing off Trump's own rhetoric, Kim has skillfully turned the remains-recovery issue into a key deliverable and a way to assert that Trump-Kim diplomacy is succeeding. But the administration can't claim real progress on the nuclear file until, at minimum, Kim hands over a declaration of his nuclear assets, a Pompeo request that Pyongyang has yet to fulfill.

The Trump administration should work with Pyongyang to get back as many U.S. soldiers' remains as possible, even if the process isn't always wholesome. But we must not delude ourselves into believing that means Kim is sincere or that the nuclear diplomacy is going well. The United States must not be duped.