Rooting for racists to win? 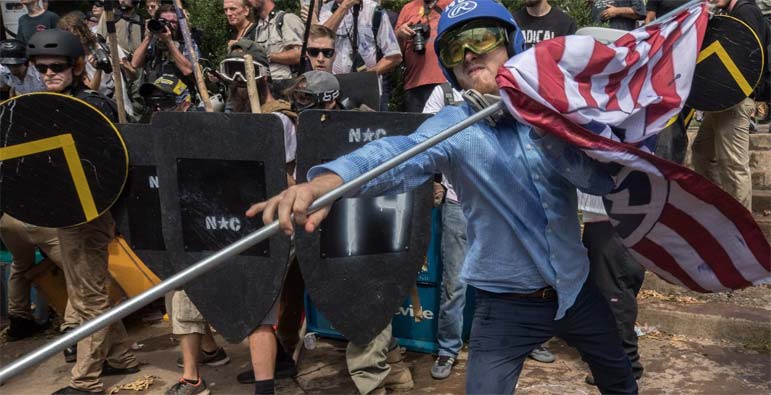 Aren't you tired of pretending that you understand the pain of the person who just called you a fascist bigot?

Haven't you had enough of those "Kumbaya" moments where you "agree to disagree," which is code for "F-U, leave me alone, I want to go eat my dinner?"

I know that I'm supposed to write some kind of solemn, wise dissertation this week on how we need to move forward, bond together and follow the better angels of our nature out of this national nightmare.

But honestly, I don't want to. I'm exhausted from all of the heavy moral lifting I've been forced to do, defending the indefensible and realizing that tolerance is not exactly a two way street (or if it is, the other side is always under construction and you get a ticket if you try and make a detour).

I know I speak for the vast, overwhelming majority of Americans when I say that we despise white supremacists, Westboro Baptists, Neo Nazis, David Duke, the KKK, anti-Semites, anti-Catholics (thought I'd try and slip that one in there so humor me) and all the other sub-humans who exploit the First Amendment and their birthright as citizens to terrorize decent people with their poison. Anyone who doesn't have a problem with them is a sick mongrel, like the guy who keeps emailing to tell me that the Holocaust never happened. I have to take a shower every time I accidentally click on one of his missives. There is no excuse for marching through a town and screaming about taking back the country. It's terrorism, with QVC-issue torches.

Contrary to what the folks on the left would have you believe, conservatives are not rooting for the racists to win. It's a little offensive to even have to put that thought into actual words, but I've read far too many Facebook posts and tweets this week blaming everyone to the right of Mao for the death of Heather Heyer. It's pretty disgusting to exploit a death for some political benefit.

But these folks are clever. They hide their opportunism behind somber concern for the tragic turn our country has taken, under the leadership of Donald Trump. They say all of the right things about human dignity, and moral leadership, and empathy. They say that people who either voted for Trump, or who haven't used strong enough words to condemn him, are lost causes. They are so disappointed.

I can only speak for myself, but I've begun to notice that those who preach tolerance have taken lessons at the Mao Tse Tung School of Social Engagement. If you did not come out quickly enough against the violence in Charlottesville, you were taken before the social media Star Chambers and charged with moral treason. Then, if you failed to admit your guilt, you were sent to a re-education camp until you figured out how to satisfy the Tolerance Stasi that you actually had a soul.

If it weren't so tragic, it would be hilarious.

But it was tragic, because it was so clearly a bit of political agitprop spun around the very real horror of three deaths. Three human beings were killed this weekend because of white racists, and their deaths were used as weapons against philosophical opponents. Let's be clear: Trump was wrong to try and create some moral equivalency between the white supremacists in Virginia and the counter protesters who came to shout them down.

Anyone who looks to a political leader for his moral True North is a fool, and there were many fools around.

But that is not enough for the left.

I'll be damned if I let them burn the rest of us at the stake.