The Search for Nothing 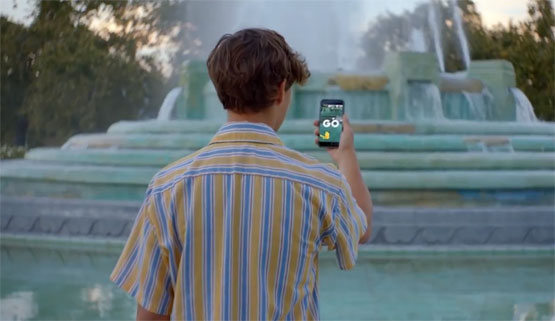 The more we look for what isn't there, the less we appreciate what we already have

Of course, you know all about it. It has overshadowed all other headline news. It has become everyone’s passion. There’s no escaping it.

No, I’m not talking about the presidential elections, climate change, or global terror. I’m talking about something really important:

If you haven’t heard of it, you probably live in a cave and won’t be reading this anyway. If you don’t understand what it is… well, that’s a different story.

For people of a certain age -- not to mention a certain level of maturity and common sense -- the latest tech-fad is barely comprehensible. Countless denizens of the virtual world have crawled out of the darkness and into the sunlight to search for animated characters that can only be seen on their cell phone screens in undisclosed locations. By wandering about pointing their phones hither and thither, players find cartoon critters, then take aim and “shoot” to catch their pixilated prey.

As inane as it may sound, the game seems relatively harmless. It also has the benefit of drawing participants off their couches and encouraging them to put their atrophying appendages back into use, sometimes by walking miles in pursuit of quarry. Guided by an all-knowing, all-seeing cosmic GPS mastermind, Pokemon creatures may crop up anywhere, leading players on quests of “augmented reality.”

But is it really harmless?

'COME INTO MY PARLOR…'

To begin with, there is the annoyance factor. How far can our zombie-culture go, as sidewalks, roadways, parks, malls and office buildings pulse with crowds of glassy-eyed Poke-players following their cell phones with no interest in their destination? Often, they leave behind the detritus of their stakeouts -- empty soda and beer cans, cigarette butts, and assorted food wrappers -- in appallingly thick layers.

And that’s just the public nuisance aspect. Sometimes, the game turns ominously dangerous. In the beginning, we read scattered reports of twisted ankles and bruised foreheads as players tumbled off of street corners and walked into lampposts. More recently, incidents include traffic accidents, grown men walking off the edge of a cliff, and a group of teenagers needing to be rescued by firefighters from a network of caves.

In Florida, an elderly man mistook two players for criminals staking out his home and opened fire on their car. In Kuwait and the UAE, players pointing their phones at high-security locations like military bases and the Emir’s palace may find themselves apprehended for espionage, as the Interior Ministry has instructed officials to exercise a “no tolerance” policy toward suspects. And all across the globe, staff at memorial sites and cemeteries are expressing their consternation over players’ insensitivity to heroes and martyrs deserving a greater measure of respect.

Then there are the opportunists, selling their accounts for hundreds of dollars or luring players to isolated locations in order to rob them at gunpoint.

AN ICON BY ANY OTHER NAME

It’s easy to dismiss this latest symptom of modern bread-and-circuses as just another passing craze, and it may be no more than just that. But in a world where people are become ever more disconnected from reality, there is something deeply disquieting about a critical mass of prowlers searching relentlessly for figments of someone else’s imagination.

We may have already crossed over into a kind of shadow-land, a world where reality and fantasy are so intermingled that we can’t differentiate between the one and the other. Facebook friends replace real friends, the substance of our conversations is consumed by characters from Game of Thrones and The Bachelorette, and now we go forth in pursuit of images that aren’t even there. As much as “augmented reality” may be a compelling slogan, “augmented fantasy” seems much more descriptive of the synthetic world in which people find themselves after tumbling down the rabbit hole.

In his chilling novel The Time Machine, H.G. Wells depicts a distant future in which the leisure class, the Eloi, bask and frolic in the sun until their former servants, the Moorlocks, emerge from the shadowy nether regions beneath the surface to literally feed upon their erstwhile masters. In this dystopian vision, it is not the meek who inherit the earth but the industrious, while those who once ruled become victims of their own indulgent lifestyle.

Do you see the man who is diligent in his work? asks King Solomon. He shall stand before kings, and need not present himself before those who stand in shadows.

Some may recall that phones were once used for business and keeping in touch with friends and relatives who lived far away. Now that they have become portals into alternate realities, we may soon find the fantastic worlds of past visionaries arriving at our doorstep in the form of terrifying realities.

There was a time when unaugmented reality was good enough for everyone. It still is, if we give it a chance.

Rabbi Yonason Goldson is a professional speaker and trainer, drawing upon his experiences as a hitchhiker, circumnavigator, newspaper columnist, high school teacher, and talmudic scholar to provide practical strategies for enhancing communication, ethical conduct, and personal achievement. He is the author of Proverbial Beauty: Secrets for Success and Happiness from the Wisdom of the Ages is available on Amazon.