Pompeo has become a China hawk 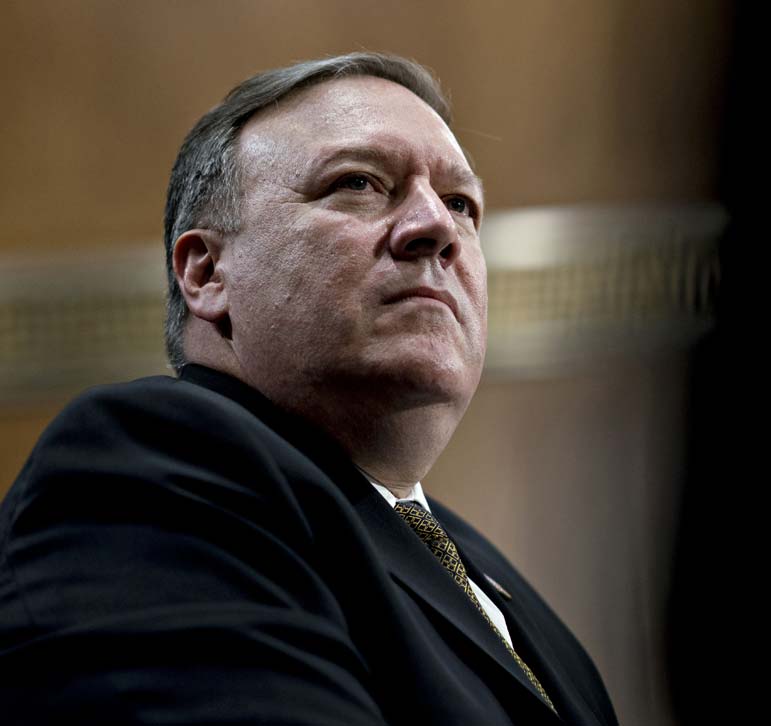 As President Donald Trump heads into a crucial meeting with Chinese President Xi Jinping, sitting by his side will be Secretary of State Mike Pompeo, who is quietly but steadily pushing U.S.-China policy into a more competitive and often confrontational position.

Pompeo's first year as the nation's top diplomat focused largely on North Korea and Iran, but he is now spending more time and attention on dealing with China. For example, Pompeo often attends "Saturday morning seminars" at the State Department, where outside experts come in to talk about strategic issues detached from the daily crises - and where China is the most frequent topic.

Increasingly, Pompeo has been speaking out about China's malign activities, while privately asking his staff to produce an overarching analysis of the motivations behind the Chinese Communist Party's conduct as well as strategies to respond.

Their challenge is to take the Trump administration's various actions on China and weave them into a broader strategy that can gain bipartisan support and outlive the current administration. "We are trying to create an intellectually persuasive argument about China being the number one challenge to the United States," a senior State Department official told me.

The project, led by State Policy Planning Director Kiron Skinner and Miles Yu, a U.S. Naval Academy history professor, faced criticism after Skinner described the U.S.-China competition as "a fight with a really different civilization and ideology" in April. Critics of the Trump administration's China approach seized upon those remarks, as did the Chinese government. State Department officials said her remarks, which also referred to China as "not Caucasian," were taken out of context.

But Pompeo's State Department has concluded that decades of engagement-focused U.S. policy have failed, and now the United States and its partners must change course and respond to the Chinese government's strategy and behavior.

"We fundamentally erred by underestimating and misunderstanding China's true intention, which is to create a Chinese Communist Party-dominated world order to replace the world order created by the U.S. and its allies," the official said. "It's not a clash of civilizations, it's a clash of political systems."

Critics like to say Trump's China approach represents a Cold War mentality or a zero-sum game. That misunderstands what the U.S. government is trying to do. Pompeo's approach is to separate the areas of the U.S.-China relationship where confrontation is needed from those where cooperation is mutually beneficial.

And while Pompeo hasn't given a headline China speech such as the one Vice President Mike Pence gave last year, he has ramped up his public criticism of Beijing. He called for Beijing to release more than 1 million ethnic minorities held in internment camps and heavily criticized Beijing's human rights practices on the 30th anniversary of the Tiananmen Square massacre.

In a May speech in Finland, Pompeo warned against Chinese encroachment in the Arctic. Two days later, in London, he linked China's internal repression, economic aggression and technological ambition as part of one comprehensive strategy and called on allies to help confront it by shunning Chinese tech companies.

"In China, we face a new kind of challenge. It's an authoritarian regime that's integrated economically into the West in ways the Soviet Union never was," he said.

As secretary of state, Pompeo must balance confronting China with maintaining Beijing's cooperation on issues such as North Korea and Iran. He must also balance limited diplomatic resources. Officials say he plans to shift personnel and expertise broadly and within each embassy to increase the focus on China.

Shortly after taking office, Pompeo sought to replace Rex Tillerson's choice for assistant secretary of state for East Asia, Susan Thornton, whose pro-engagement views clashed with those of her Trump administration colleagues. The replacement effort took a year, but this month retired Air Force Gen. David Stilwell, whose views on China track Pompeo's, was finally confirmed by the Senate for the job.

There's a sense that Pompeo's argument is directed internally, as well. Some officials, such as Treasury Secretary Steven Mnuchin, are resisting a more confrontational China policy. Trump wants to be tough on China on trade and economic aggression but shows little interest in China's human rights violations or its coercion of Taiwan, for example.

Skinner compared the State Department's effort to George Kennan's Long Telegram, which formed the basis for the Cold War containment approach. But she was not saying China is like the Soviet Union; she was saying the China challenge is more complex and, in a way, more daunting.

Kennan, in fact, was a realist who believed in accommodating the Soviet Union. Pompeo is no Kennan; he's much more hawkish.

The truth is, nobody knows where Trump will end up on China on any specific point. But Pompeo's twin approach of confronting China now while planning for longer-term resilience against Beijing's strategy is meant to ensure that the ongoing shift in Washington over China is not dependent on any one administration.