Who Commits Most of the World's Extremist Violence? 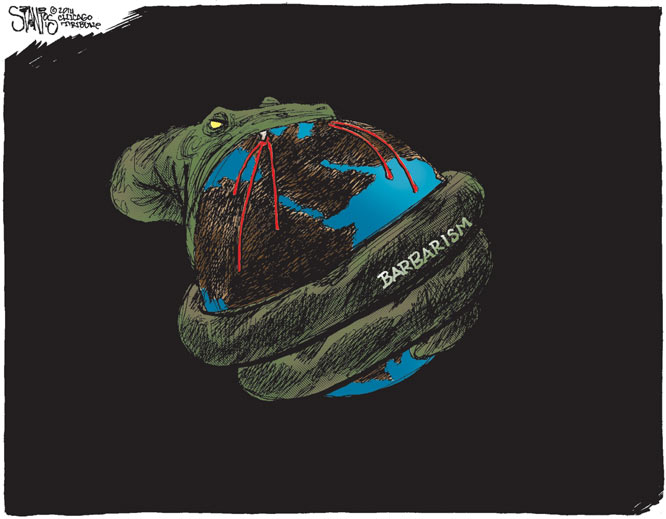 Last month, the New York Times featured an illustrated timeline of "white extremist" killings over the last nine years, with lines demonstrating citation and affiliation among the killers. According to the Times, the record shows "an informal global network of white extremists whose violent attacks are occurring with greater frequency in the West."

The idea that white supremacist violence is a growing global threat has gained more currency recently, notably in the wake of the ghastly Christchurch mosque massacre, when an avowed white nationalist murdered 50 Muslims and, more recently, the mass shooting at Chabad of Poway, near San Diego, where one died. New York congresswoman Alexandria Ocasio-Cortez, for instance, asserted that "White supremacists committed the largest # of extremist killings in 2017." No one will deny that racial hatred is an evil ideology, and that people who kill in the name of white supremacy commit evil—but is it true that white extremists are sowing a growing amount of worldwide mayhem?

The evidence suggests otherwise. Even a superficial glance at the record indicates that of the nearly 20,000 people killed in thousands of extremist killings in 2017, white supremacists were responsible for very few. The worst terrorist event of 2017, according to the State Department, was the explosion of a truck bomb outside the Safari Hotel in Mogadishu, Somalia, which killed more than 580 people. This violent act is believed to have been the work of Al-Shabaab, which was responsible for 97 percent of the 370 instances of extremist killings in Somalia in 2017, accounting for about 1,400 deaths—mostly civilian. The remaining violent acts were carried out by Jabha East Africa (ISIS-Somalia), a dissident Al-Shabaab splinter group.

The deadliest extremist attack in Egypt's history took place in 2017, when ISIS-Sinai terrorists converged on a mosque in Sinai during Friday prayers and slaughtered 312 people, including 27 children, when they came outside. Also in Egypt that year, on Palm Sunday, an extremist suicide bomber connected to IS-Egypt killed 30 Coptic Christians at a church in Tanta. He coordinated his actions with another suicide bomber, who killed 16 people at a church in Alexandria.

The first day of 2017 was marked by an ISIS attack on a nightclub in Istanbul; the Uzbeki perpetrator killed 35 people. In April, another Uzbeki rammed a truck into a crowd of people in Stockholm, killing seven. In August, ISIS militant Younes Abouyaaqoub ran a truck into a crowd of people in Barcelona, killing 15 people. I mention these acts of extremist killing in Turkey, Sweden, and Spain to illustrate the global nature of the phenomenon; strictly in terms of the numbers of people killed, they are scarcely of note.

White nationalists committed none of the above violent acts of extremist killing, and that's nothing remarkable: almost all the world's extremist violence is concentrated in a handful of regions, where very few white people live. In areas where whites do live (America, Canada, Europe, and Australia/New Zealand), white nationalists do indeed perpetrate a significant proportion of the relatively uncommon acts of extremist violence. Again, this is unsurprising, because whites make up the overwhelming majority of the population there.

The New York Times timeline of "white extremist" murders covers nine years and 15 incidents, bookended by the heinous and indisputably racist attacks in Norway (in 2011) and Christchurch. Some of the most prominent killings among the remaining 13 incidents, though, resist categorization as acts of white racial terror. Ali Sonboly, the son of Iranian Shi'ite Muslim immigrants and visibly a racial minority, carried out the 2016 Munich mall shooting. The 2016 Umpqua Community College shooting was carried out by a self-identified "mixed-race" man, as was the 2014 Isla Vista massacre, whose perpetrator believed that being half-Chinese made him unattractive to women. The 2018 Toronto van massacre was perpetrated by a white man who declared that he was part of an "Incel Rebellion" against the "Chads and Stacys" of the world—in other words, he was angry that he could not get a girlfriend and was committed to overthrowing the "beautiful people." The killer mowed down pedestrians in Toronto's business district at random. The Times' inclusion of these four incidents calls into question the value of its diagnosis of "white extremist killers."

When Ocasio-Cortez tweeted that white supremacists were responsible for the most extremist killings of 2017, she was obviously wrong, by at least two and maybe three orders of magnitude (if she meant worldwide, which is unclear from her tweet). There were at least 8,500 such incidents worldwide that year, and white supremacists accounted for perhaps 15 or 20 of them, depending how you count. But perhaps Ocasio-Cortez was thinking of the U.S. and may be relying on an Anti-Defamation League report, "Murder and Extremism in the United States in 2017," for her information. According to the ADL, 34 people were killed as a result of extremist violence that year in the United States—eight of them by Sayfullo Saipov on Halloween in lower Manhattan. Another victim was Heather Heyer, who was run over by James Fields during the Charlottesville protests.

Heyer's killing can legitimately be labeled an act of white nationalist violence, as Fields was an open admirer of Hitler and the Confederacy. But the other murders that the ADL counts as "extremist-related" are fuzzy, even by the ADL's standards. For instance, Frank Ancona, a Klan member from Missouri, was killed in a domestic dispute by his wife, also a Klan member. And some of the other events, according to the ADL, "include killings stemming from factional disputes, murders of suspected informants, as well as murders committed by extremists in the pursuit of traditional criminal motives."

The Wall Street Journal, citing the U.S. Extremist Crime Database, reports that the frequency of violent hate crime in the United States has been about the same for 50 years. White supremacy is insane and immoral, and it may be a significant threat. But it doesn't account for anywhere near the preponderance of global extremist violence, though one might get a different impression from recent coverage.

Previously:
• 03/11/19 America rescued Ilhan Omar and her family, but to hear her tell it, we are the ones who should be grateful
• 01/24/19 BEATING THE DRUM: As the Covington High School brouhaha reminds us, the media have precast the meaning of every story
• 12/04/18: Charged With Discrimination: Pols moves to ban some 'cashless' establishments, arguing that they are racist
• 11/19/18: The deep ties between the depraved cult leader Jim Jones and prominent Democratic politicians
• 10/05/18: 'Globalist' Doesn't Mean 'Jew'
• 09/12/17: Mayor de Bolshevik: Will his dangerous dogma be embraced by others on America's far-left?
• 08/21/17: Shadow President?
• 08/15/17: Between Chaos and Competence: The Trump administration has been remarkably substantive, but its two competing narratives can't coexist forever
• 09/22/16: Three Blind Mayors: The elected leaders of Paris, London, and New York should know better than to downplay the frequency of radical attacks

Seth Barron is project director of the Manhattan Institute's NYC Initiative. He wrote this for City Journal.