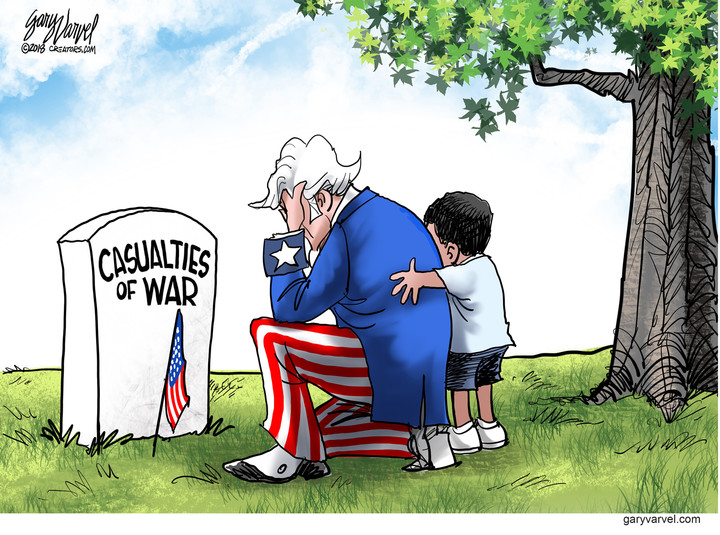 "A single death is a tragedy; a million deaths is a statistic." This line, as brutal as it is true, is widely ascribed to Joseph Stalin, a man with terrible knowledge of death on every scale, from the single bullet to the brain of some former associate to the millions starved in Ukraine. But the general idea has been around for centuries.

It is the switch in the human brain that makes war and other atrocities possible. Many years ago, a friend of mine lost his 10-year-old son in a fire; the news hit me like a physical blow and decades later I still recoil at the thought. Thinking about the firebombing of Tokyo does not make me feel 100,000 times worse. Such pain would be unbearable.

Arguably this is also part of the distance that grows between combat soldiers and the civilians they serve. The soldier who is actually in the fight has a greater inkling of the humanity behind the statistics, a keener feeling for the individual lives - friends and foes - that add up one by one and 10 by 10, to a thousand, a million, 10 million.

Nearly 7,000 U.S. Marines died in the 36-day battle for the eight square miles of Iwo Jima. The statistician sees that number and calculates an average of nearly 200 per day and nearly 1,000 per square mile; the surviving veteran bears memories of screaming friends and spattered brains, week after week under the relentless sun. And where the history books say that 18,000 Japanese went onto that little island and only 216 came off, men who were sent to perform that fearsome reduction understand it not numerically, but viscerally.

Memorial Day can be an opportunity to narrow - a bit, for a moment - the gap between specific and general, tragedy and statistic. The holiday arose from the trauma of the Civil War; it was a way of personalizing the enormous sacrifice. One day in the fullness of spring, the season of life and renewal, Americans made a ritual of decorating the graves and memorials of the war dead. The abstraction of war was tied down for a moment to the loss of real people with faces, names and families.

That war was followed by more wars, and the dead of the Civil War were joined by the dead from other generations. What was originally called Decoration Day became known as Memorial Day. And no matter how many beer bashes, clearance sales or swimming pool openings are scheduled for that day, its reason for being is remembrance and reflection.

The holiday is not necessarily antiwar, but if it stirs a pro-war feeling in your heart, you might not be doing it right. What Memorial Day asks is that we respect war enough to come to grips with its destructive power and steep price. What Memorial Day understands is that respecting war begins with mourning one life cut short, one tragedy, one grave. From there, we can try to imagine that pain times a million. We can try to transfuse life into the statistics.

I used to drive frequently past Arlington National Cemetery. Sometimes, I looked over to see 624 acres of rolling green countryside speckled with white headstones. But if I paused to imagine just one real person under one marker, the enormity would wash over me.

"We are the Dead. Short days ago / We lived, felt dawn, saw sunset glow, / Loved and were loved, and now we lie, / In Flanders Fields."

If you don't have a national cemetery or battlefield close by, I suggest you use your computer to visit YouTube or Vimeo. Search for "The Fallen of World War II" by a man named Neil Halloran. This 18-minute "cinematic data visualization" brilliantly takes you from the tragedy of an individual killed in the war to the catastrophe of 60 million individuals gone.

Even more brilliantly, Halloran illustrates the comparative peace of the years since 1945. That, too, is a statistic in need of new life.

For it has become fashionable in many corners of the world for tough-talking leaders to question the value of alliances, treaties and partnerships. These new nationalists rue the cost of the world order in terms of money and crimped sovereignty. They toy with breaking up the European Union, splintering NATO, blocking the arteries of trade that bind nations together.

Such thinking is enabled by that switch in the brain that turns slaughter into data. Anyone who has struggled to grasp the world as it was before these peacekeeping networks were woven - the global wars, the genocides, the deliberate famines and so-called revolutions that together decimated the early 20th century - cannot wish to return to the past. That would be a tragedy indeed.

The dead have a lesson to teach us. Memorial Day is for listening - and learning.