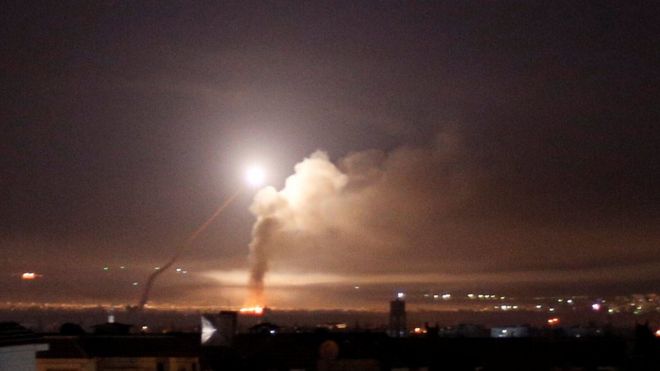 GOLAN HEIGHTS --- The Israeli military said Thursday that it had bombed dozens of Iran-linked military facilities in Syria, as tensions between the three countries soared.

The army said in a statement that its fighter jets had targeted Iranian intelligence and logistics sites around Damascus, as well as munition warehouses, observation and military posts.

The attacks followed a wave of overnight missile strikes directed at Israeli territory - all of them apparently intercepted - that Israel blamed on Iran.

From Mount Bental on the Golan Heights, Israeli military spokesman Lt. Col. Jonathan Conricus pointed out where he said an Iranian rocket salvo had fired toward Israel just after midnight. "We saw it was very clear what the Iranians were doing, attacking Israel from Syrian soil," he said.

Four of the 20 rockets were on target, he added, but were then intercepted, while the rest fell short. Israel responded by hitting 70 Iran-linked sites in Syria. "This was by far the largest strike we have done, but it was focused on Iranian sites," he said.

Syrian air defenses were also struck after they fired on Israeli jets, he acknowledged.

Israel and Iran have been on a collision course in Syria, as Israel has vowed not to let Iran build a presence and escalated attacks against Iranian targets across the border. Iran had vowed retaliation after seven of its soldiers were killed by an Iranian airstrike in April.

Analysts say President Donbald Trump's scrapping of the Iran deal means it has less to lose by retaliating, and the move has added weight to hard-liners in the Islamic Republic who want to show strength.

Tehran's strong support for Syrian President Bashar al-Assad has allowed it to deepen its foothold across Syria, but Iranian media downplayed Tehran's role in the violence, depicting the clashes instead as between Israel and Syria.

The Syrian Observatory for Human Rights, a monitoring group, said that casualties were expected, although it did not provide a number.

The army spokesman Brig. Gen. Ronen Menalis also said that Israel could still do plenty more if it was so inclined.

"What we did tonight is only the tip of the iceberg of the Israeli Army's capability," he said Thursday morning on Israel Army Radio.

Separately, Syria's state news agency conceded that at least one ammunition storage site had been hit, but claimed that the other strikes had been intercepted.

Speaking at the annual Herzliya Conference on Thursday morning, Liberman said his country's position was clear, "we will not allow Iran to turn Syria into a front line post against Israel."

Air raid sirens sounded in the Golan Heights shortly after midnight Thursday. In nearby Tiberias, on the edge of the Sea of Galilee, explosions could be heard above the music of bars entertaining busloads of tourists. The explosions were followed by sporadic fire into the early morning hours.

Israeli residents of the Golan Heights reported a restless night in bomb shelters but that life had returned to normal Thursday morning. Schools were open and farmers continued with work as usual.

Targets belonging to the al-Quds Force and the Revolutionary Guard throughout Syria have taken a significant hit," said army spokesman Menalis. "In the next few hours they will understand very well how much we have hit them."