Europeans scramble to save Iran nuclear deal, but face new concerns over US sanctions 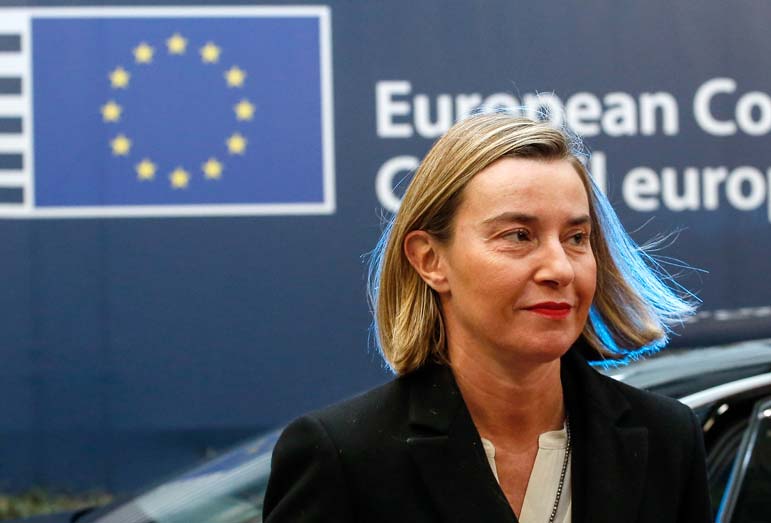 PARIS - European leaders opened a diplomatic push Wednesday to salvage the Iran nuclear accord without the United States, starting direct talks with Tehran and considering how to maintain business ties in the face of Washington opposition.

"The deal is not dead," said French Foreign Minister Jean-Yves Le Drian, speaking on France's RTL radio. "There's an American withdrawal from the deal, but the deal is still there."

"The French president emphasized the willingness of France to continue enforcing the Iran nuclear agreement in all respects," said a statement from the Elysee Palace. "He underlined the importance that Iran do the same."

Those sentiments were shared in other capitals backing the 2015 accord: Brussels, London, Berlin, Moscow and Beijing.

Rouhani has ordered his diplomats to engage with their European counterparts. However, he and other moderates who support the accord, and diplomacy more generally, are under pressure from staunch conservatives who have long opposed it.

"I don't trust these three EU countries either," Iran's supreme leader, Ayatollah Ali Khamenei, tweeted in English. "If the govt. wants to make a contract, they should ask for a guarantee, or else they will all do just as the U.S. did."

When President Trump announced on Tuesday that the United States would be withdrawing from the deal - a signature achievement of President Barack Obama's administration that placed limits on Iran's nuclear program in exchange for lifting international sanctions - he complained that its sunset provisions did nothing to stop Iran from seeking nuclear weapons in the future.

"The agreement was so poorly negotiated that even if Iran fully complies, the regime can still be on the verge of a nuclear breakout in just a short period of time," he said.

Administration officials who filled in the gaps of Trump's announcement made clear that the United States plans a full return to pre-deal sanctions, with the potential for new measures, and that there is no plan to issue waivers or allow allies or favored companies to circumvent their full effect.

That means European companies and others that have moved into Iran since the deal took effect will have to choose between shutting down operations there or continuing to do business in defiance of the United States - and risk their access to the much larger U.S. market.

Among the firms that would be affected is Airbus, a European aviation consortium, which in 2016 won a $19 billion contract to provide 100 planes to national carrier Iran Air. It has delivered three planes so far. (U.S. aviation firm Boeing also won contracts worth about $20 billion.)

"We're carefully analyzing the announcement and will be evaluating next steps consistent with our internal policies and in full compliance with sanctions and export control regulations," a spokesman for Airbus said in a statement.

French oil giant Total is another major beneficiary of the Iran deal's lifting of sanctions, securing a $2 billion agreement to develop the South Pars oil field, shared between Iran and Qatar.

"Today, for Total, is a historic day, the day we come back to Iran," Patrick PouyannĂ©, Total's chief executive, said at a signing ceremony in Tehran in July. Now that agreement is in doubt.

Pressures on European companies "are actually intended consequences," according to a senior State Department official, who spoke on the condition of anonymity under department ground rules. With virtually no existing U.S. economic relationship with Iran, the official said, "secondary sanctions," primarily affecting Europe and Asia, are among the best ways to squeeze Iran's economy.

The United States used secondary sanctions to isolate Iran before the nuclear agreement, the official said. "That's what we want to do again. It's not about sanctioning foreign companies; it's about using the leverage and engaging the way we did before."

"The sanctions worked last time," Treasury Secretary Steven Mnuchin told Fox News, and brought Iran to the bargaining table. The goal now is to partner with allies to push Iran to negotiate a new agreement that will cover nuclear activities as well as ballistic missiles and destabilizing Iranian activity in Syria, Yemen and beyond.

The administration took Macron's Tuesday tweet saying he was prepared to "work together on a broader framework," covering all of Iran's bad behavior, as evidence "that France is eager to be part of an effort" to pressure Iran, the State Department official said.

However, after the new U.S. ambassador to Germany, Richard Grenell, tweeted that "German companies doing business in Iran should wind down operations immediately," Bruno Le Maire, France's finance minister, fired back that the United States should not consider itself the world's "economic policeman."

In a statement, the EU said that "sanctions lifting has a positive impact on trade and economic relations with Iran. The EU stresses its commitment to ensuring that this can continue to be delivered."

Eric Schweitzer, head of the Association of German Chambers of Commerce and Industry, said it is "incomprehensible that the activities of German companies should still suffer" while the EU remains committed to the accord.

As explained by the State and Treasury departments, U.S. measures will be implemented in several phases. All new contracts with Iran are immediately banned.

All existing contracts must be terminated within 90 days, with the exception of energy-related relationships and contracts, which are being given a 180-day "wind-down" period. "We wanted to be careful on the energy markets, that we had an orderly transition away from Iranian oil," Mnuchin said.

The administration will also redesignate all Iranian individuals and entities who were specifically sanctioned by the U.S. government before the nuclear agreement went into effect - a total of at least 600.

In Europe, the U.S. withdrawal from the accord has been seen as a significant blow to transatlantic relations - more devastating than Trump's decisions to take the United States out of the Paris climate accords, recognize Jerusalem as the capital of Israel and threaten unilateral sanctions on aluminum and steel. No other issue saw European leaders go to such lengths to change Trump's mind over such a lengthy period of time, and none ended in greater humiliation.

There are some measures that European leaders can take to try to protect European enterprise in Iran.

"Europeans need to at least debate threatening to impose costs on U.S. action," said Ellie Geranmayeh, a senior policy fellow at the European Council on Foreign Relations. She suggested that EU leaders could respond to secondary sanctions by targeting American companies in Europe.

The question, Geranmayeh said, is "the extent to which the Europeans are going to allow their own companies to be hamstrung by U.S. foreign policy."

"The EU can take steps to mitigate the impact of the sanctions," said Luigi Scazzieri of the London-based Center for European Reform. "But overall, companies will be scared. They will also prioritize their business with the U.S."