The Dems' frightening embrace of socialism 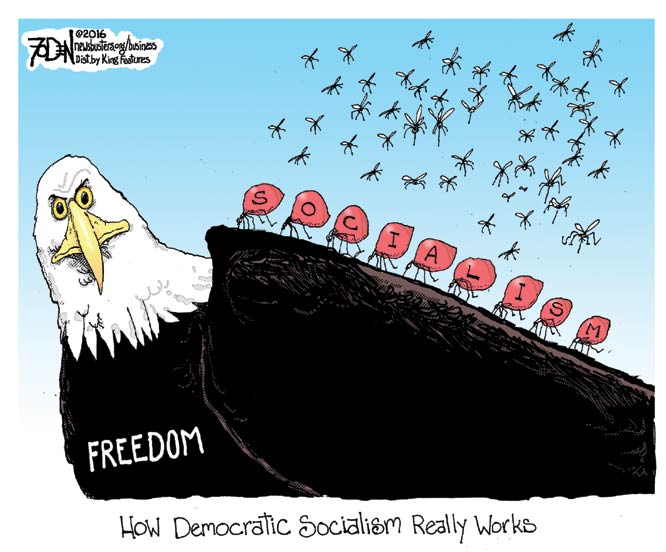 Speaking at an event in New York City last week, Hillary Clinton said something interesting about Democrats today and their lurch to the left.

Clinton said being a capitalist "probably" hurt her when campaigning against democratic socialist Sen. Bernie Sanders, I-Vt., in 2016.

Part of the reason so many Republicans are frozen like a deer in headlights when it comes to President Donald Trump is the horror of thinking about Clinton as president. It is stunning to realize how in today's Democratic Party, being a capitalist is something one must either apologize for or at least give qualified acceptance.

Talk about nostalgia for the 1950s. It seems that socialism is making a comeback.

I think if Bill Clinton had been asked the same question Hillary was, he would have thought it was a softball and proceeded to give a valuable history lesson on the negative impact of socialism versus the global benefits of capitalism.

Of course, Hillary Clinton's instinct is to pander and hedge, but it is nevertheless revealing that she thought she had to do so to keep from alienating the socialists.

Democrats want to talk about Republicans living in the past, but the new progressives, as they like to call themselves, are in fact a lot like the old socialists. They want free college, free cash, free health care, new mandates for this and that, and so on.

The latest progressive policy du jour to be gaining traction among Democratic Party presidential hopefuls is the so-called "job guarantee." Sen. Cory Booker, D-N.J., announced one, Sen. Bernie Sanders, I-Vt., has one in the works, and Sen. Kirsten Gillibrand, D-N.Y., says she supports the idea, too.

Yet there are some signs of intellectual honesty on the left. Kevin Drum, a liberal blogger for the progressive gospel Mother Jones, thinks the jobs guarantee is a ludicrous idea: "Even our lefty comrades in social democratic Europe don't guarantee jobs for everyone. It would cost a fortune; it would massively disrupt the private labor market; it would almost certainly tank productivity; and it's unlikely in the extreme that the millions of workers in this program could ever be made fully competent at their jobs."

If Democrats go down this road, their only way forward will be to one-up each other in every primary election. Clueless liberals such as Facebook co-founder Chris Hughes want to guarantee $500 per month for every American earning less than $50,000 a year.

A guaranteed monthly stipend would become the floor. And every subsequent election would be a referendum on whether voters want to support the candidate promising the larger pay raise from Washington. Is that where we want our elections to go?

Anyway, Clinton's admission of the Democrats' matter-of-fact acceptance of socialism couldn't have been any timelier.

Saturday marked the bicentennial of Karl Marx's birth, and as Paul Kengor reminded us in his smart Wall Street Journal commentary last week, Marx's communist philosophy "set the stage . . . for the greatest ideological massacres in history." Marx's rebuke of capitalism and individual property rights inspired the likes of Vladimir Lenin, Leon Trotsky, Mao Zedong, the Kim family, the Castros and countless others to wage mass murder against millions of innocents.

But never mind that, at least according to many of today's millennial voters.

According to the 2017 YouGov-Victims of Communism Memorial Foundation Report on U.S. Attitudes Toward Socialism, more millennials would prefer to live in socialist countries than they would in capitalist countries.

That fact reveals a powerful force shifting today's Democratic Party. Barack "you didn't build that" Obama and his contempt for private business is starting to seem quaint. It certainly means every Democrat running for president in 2020 will be asked if they favor socialism or capitalism.

It will be interesting to see if they blush, stammer and wince, or if any of them will have the confidence to give a robust endorsement of free enterprise and a historically accurate critique of socialism vs. capitalism. I'm not holding my breath.

Rather than there be a wholesale capitulation to the shallow-minded embrace of socialism, I hope at least a few Democrats will have the courage to teach millennials and others the history of socialism's debilitating, murderous past and the historic human advancement that has been produced by a free market.

Remember, socialism is just a kinder, gentler version of communism. Democrats should think twice before they abandon capitalism.