SCOTUS should not usurp the voice of the people 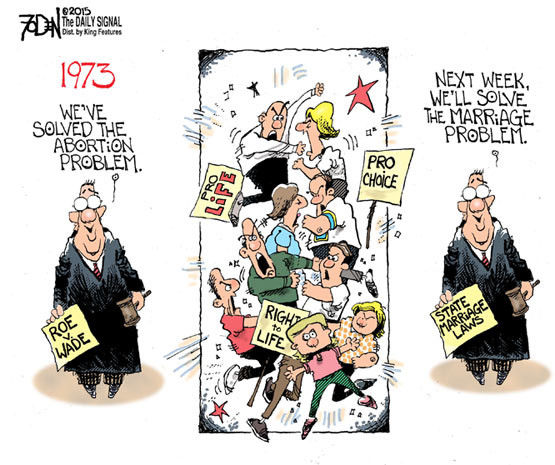 John Roberts cut through the semantics and the florid prose about "dignity" when he said this to one of the attorneys arguing in favor of same-sex marriage: "You're not seeking to join the institution. You're seeking to change what the institution is."

And there, my friends, you have the critical question: is marriage a large-tent institution that embraces many different variations of "devotion" (and therefore gays and lesbians are only asking to enter under the tent,) or is it a solemn petrified edifice that must be remodeled, stone by stone, to accommodate the wishes of a newly-empowered minority.

When you put it that way, you understand what is really at stake.

It's common to hear opponents of same-sex marriage described as bigots, religious zealots or inhabitants of the "wrong side of history," as if we were walled up behind Check Point Charlie in East Berlin. There is this sense of inevitability on the part of gay marriage advocates, to the point that they can sometimes even show sympathy for those of us who insist on traditional definitions. I've had conversations where my enlightened interlocutor will smile sadly, tilt her head as if dealing with a confused child and figuratively pat me on the head as if I were Cindy Lou Who and she was sending me off to my bigoted bed with a glass of milk.

Actually, "she" has been learning a lot of things lately, particularly in the wake of the conscience law controversy in Indiana last month. Hopefully, the justices on the high court have been studying up as well, particularly when it comes to that crash course in societal bullying.

John Roberts wasn't explicit, but it's clear he was referring to what happened in his native Hoosier state when he observed that gay and lesbian couples are trying to impose their conception of marriage on a pre-existing institution, changing it beyond recognition. Attorney General Donald Verilli also realized what was happening when, in response to a question about what impact the universal legalization of gay marriage would have on a religious school's right to deny teacher housing to a gay couple, he delivered the equivalent of a sophisticated "uh, um" and failed to provide a legitimate answer.

That's what usually happens when marriage equality advocates are faced with the blunt question: "What do you do if someone doesn't want to bake you a cake?" or in more general terms, how does your concept of equality square with someone else's sense of freedom?

Before the Indiana dust up, proponents of same-sex marriage tried to make it seem as if legalization of these unions was simply a matter of due process and equal protection, or as Justice Anthony Kennedy likes to trill in his Rod McKuen-like majority decisions, "dignity." But when it comes to the dignity of people who object to gay unions on religious or moral grounds, they are dismissed as bigots. The rainbow flags come out, CNN marches into the street to find the most aggrieved and photogenic victims and, poof!, a governor is reduced to blathering apologies about offending a minority whose political clout far outweighs its size.

I'm actually glad this happened so close in time to these critical oral arguments on same-sex marriage, because it provides a blueprint for the justices of how we arrived at the point where two men marrying each other became an undeniable civil right, and speaking out against it became hate speech.

This is the classic modus operandi of those who seek change by all costs, even through intimidation. The advocates for marriage equality (clever term) are well-versed in that practice which was perfected by feminists of the Roe v. Wade era. They could not find an actual "right" to abortion in the constitution, and so they switched their focus and started talking about the "dignity" of women while at the same time, minimizing the dignity of the unborn child. At some level, it was a fabulous success. Abortion became legal at a national level.

But anyone who has been a warrior on the bloody battlefield of abortion rights over the past four decades knows how Roe kept the debate alive, because we who think judges shouldn't usurp the voice of the people on these crucial issues refused to go gentle into that nihilistic night.

I'm predicting that will be the case if the justices rule in favor of the same sex advocates. Frankly, if you asked a majority of Americans, they'd have no problem with giving same sex couples all of the legal rights and privileges (and headaches) conveyed by traditional marriage. By nature, we tend to be an egalitarian population that rewards fair dealing.

But we don't like to be told by a few men and women in black robes that, because we disagree with the frenetic wave of change orchestrated by a motivated minority, we are bigots. As Justice Roberts said, "People feel very differently about something if they have the chance to vote on it than if it's imposed on them by the courts."

If the high court chooses to reward the loudest voices with a right that simply does not exist at either common law or in the reverent folds of the constitutional fabric, they can rest assured that there will be battles waged by those who refuse to capitulate in someone else's version of "dignity."

They could be people of faith. They could be atheists with a devotion to constitutional integrity. Or they could simply be people who prefer the stability of a great stone edifice to the wind-whipped flimsiness of a fragile tent.