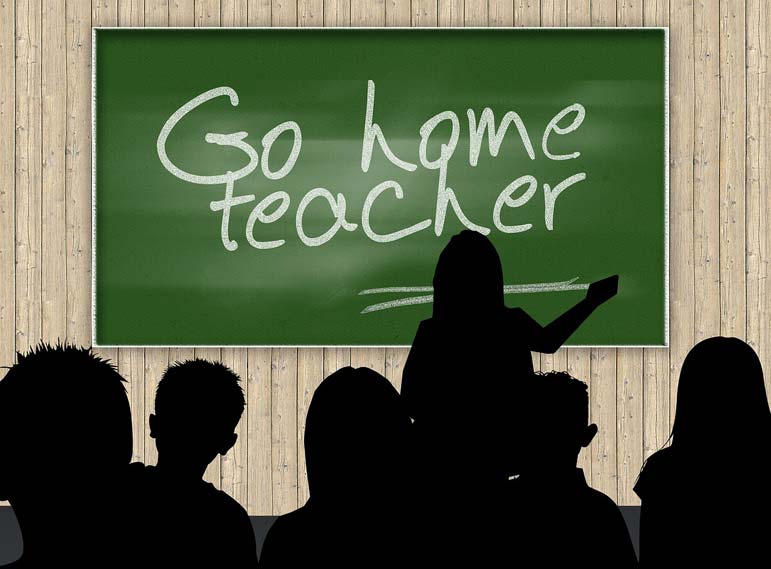 Race advocates and the media are greeting a new Government Accountability Office report on racial disparities in school discipline as a vindication of Obama administration policies.

The GAO found that black students get suspended at nearly three times the rate of white students nationally, a finding consistent with previous analyses. The Obama Education and Justice Departments viewed that disproportion as proof of teacher and principal bias. Administration officials used litigation and the threatened loss of federal funding to force schools to reduce suspensions and expulsions radically in order to eliminate racial disparities in discipline.

The GAO report, which implicitly rubberstamps the Obama approach, comes just as Trump education secretary Betsy DeVos is evaluating whether to rescind Obama's school discipline directives. DeVos should go forward with that rescission: the administration's policies were fatally flawed, as is the GAO report that attempts to justify them.

The GAO report ignores the critical question regarding disciplinary disparities: do black students in fact misbehave more than white students? The report simply assumes, without argument, that black students and white students act identically in class and proceeds to document their different rates of discipline. This assumption of equivalent school behavior is patently unjustified.

According to federal data, black male teenagers between the ages of 14 and 17 commit homicide at nearly 10 times the rate of white male teenagers of the same age (the category "white" in this homicide data includes most Hispanics; if Hispanics were removed from the white category, the homicide disparity between blacks and whites would be much higher). That higher black homicide rate indicates a failure of socialization; teen murderers of any race lack impulse control and anger-management skills. Lesser types of juvenile crime also show large racial disparities. It is fanciful to think that the lack of socialization that produces such elevated rates of criminal violence would not also affect classroom behavior. While the number of black teens committing murder is relatively small compared with their numbers at large, a very high percentage of black children—71 percent—come from the stressed-out, single-parent homes that result in elevated rates of crime.

The GAO report makes no effort to control for family structure in looking at different discipline rates. The report did control for the percentage of poor students in any given school, which is defined by the proportion of students receiving free lunches. It found that black students in schools with lower rates of student poverty are still disciplined more than white students.

But we don't know whether those black students themselves were more likely to come from single-parent homes, and we most certainly do not know how those suspended black students actually behaved in class compared with their white counterparts—the most relevant question of all.

Observational studies of classroom behavior are in short supply, the result of the taboo against researching racial behavioral disparities. But the GAO did not even avail itself of what data do exist on student behavior. The Justice and Education Departments recently released their annual report, "Indicators of School Crime and Safety."

Black students self-reported being in a physical fight at school at over twice the rate of white students in 2015—a data point certainly relevant to the question of racial rates of school discipline. Schools that were 50 percent minority or more reported weekly gang activity at nearly ten times the rate of schools where minorities constituted 5 percent to 20 percent of the population.

The GAO, like the civil rights offices of the Obama Education and Justice Departments, ignored these data. Instead, the GAO adopted a favorite tactic of academic bias researchers: it claimed that black students are disciplined more frequently for offenses that are allegedly subjective or "largely based on school officials' interpretations of behavior." For the GAO and the activists, it therefore follows, without further proof, that that supposed subjectivity results in an outpouring of teacher and principal bias.

The GAO's allegedly subjective categories include insubordination, defiance, disobedience, and classroom disruption. It is a stretch to deem those categories subjective, let alone impermissibly so—they refer to actual behavior. The GAO report complained that a Kentucky school district that had been sued by the Obama administration did not specify all the behaviors that constitute "failure to follow directions," "deliberate classroom disruption," and "profanity." The bureaucratic effort that would be required to define these categories more specifically while covering the necessary range of misbehavior would be wasted. These infractions are clear enough, and teachers and principals should be trusted to apply them fairly. Given what we know about the breakdown of family socialization in the black community, it is wholly consistent that black students would be more prone to insubordination and classroom disruption.

"Objective" metrics regarding attendance show the identical racial disparities. As U.S. Civil Rights Commissioner Gail Heriot shows in a forthcoming report, the rate of chronic truancy (defined as 18 or more unexcused absences) was five times higher for black elementary school students in California than for white students. That "objective" behavioral disparity tracks the "subjective" behavioral disparities and grows out of the same home and socialization challenges that produce classroom disobedience.

The GAO report superficially reviewed a handful of bias cases brought by the Obama Education and Justice Departments against school districts. Since the GAO uses the same behavior-free analysis, it's no surprise that it parrots the conclusions of those suits. The report provides only two concrete examples of allegedly biased discipline. A black tenth-grader in Kentucky with 19 previous disciplinary referrals was given a one-day suspension for skipping school, whereas a white 12th-grader with 28 previous disciplinary referrals who had skipped school was given only a conference with the principal.

One would need to know several things before concluding that this disparate treatment was the result of bias. What were the grounds for each student's previous disciplinary referrals: smoking a cigarette, or punching his teacher? How many previous warnings and alternative discipline methods had each student received? The younger black student's rate of referrals is outpacing the older white student's by more than a third. That suggests that he was more of a problem student.

The report's other example of biased discipline concerned a black student in a California school dedicated to teaching Hmong culture. The student's parents were asked on a few occasions to pick him up for misbehavior. Because the school did not keep adequate records on such informal discipline, the GAO agrees with the Obama Education Department that the requests to pick up the student must have been biased.

The report notes that boys are disciplined at higher rates than girls but mysteriously fails to level charges of sex discrimination against school teachers and administrators. It does not explicitly note, though it is true, that whites are disciplined at higher rates than Asians. According to GAO logic, school officials must be biased against whites. In fact, white students misbehave more than Asian students, just as boys misbehave more than girls. Males dominate the criminal-justice system, and Asians barely show up at all. These adult criminal predilections track the rate of impulse control in children.

The New York Times gloats that the report undercuts conservative claims that the Obama administration policy has resulted in a decline in school safety. But the GAO did not look at school safety rates at all. Numerous reports have documented just such an effect, however. The Manhattan Institute's Max Eden found that students in New York City schools reported much higher levels of violence and disrespect after Mayor Bill de Blasio limited school suspensions. A student was stabbed and killed in history class in a New York school where teachers reported a dramatic drop in discipline. Two researchers with the Wisconsin Institute for Law and Liberty recently reported on increased school violence across the country.

The district attorney in St. Paul called the rise in attacks on teachers a "public health crisis." The district attorney in Syracuse forced schools to return to traditional disciplinary policies after a teacher was stabbed. Charlotte is experiencing an increase in guns, drugs, and assaults on teachers; school assaults in Durham increased more than 50 percent last year. And the education of students, especially black students, is suffering as well. Wisconsin schools that adopted the non-punitive disciplinary measures advocated by the Obama administration (and now, the GAO) had lower reading and math achievement than schools that stuck with traditional discipline.

Teachers are among the most liberal professionals in the country. Education school is one long marinade in white-privilege theory. Yet we're supposed to believe that once these social-justice warriors enter the classroom, they are unable to evaluate their black students fairly. Overcome by prejudice, they see disruption and defiance where none exists. The opposite hypothesis is more likely: teachers strive mightily to avoid removing black children from classrooms. They do so only after other means of discipline have been exhausted, and they do so in order to preserve the right of other students to learn in a safe and orderly environment and to instill a sense of consequences in students who break the rules.

The GAO report is a product of ideological blinders, a disappointment from an agency that once stood for nonpartisan analysis. Secretary DeVos can learn very little from it. She should reject the counterfactual claims of systemic bias in the nation's schools and rescind the destructive Obama-era school-discipline directives. Then she should commission a host of observational studies of student behavior to put to rest, once and for all, the myth that only racism explains differential rates of school discipline.