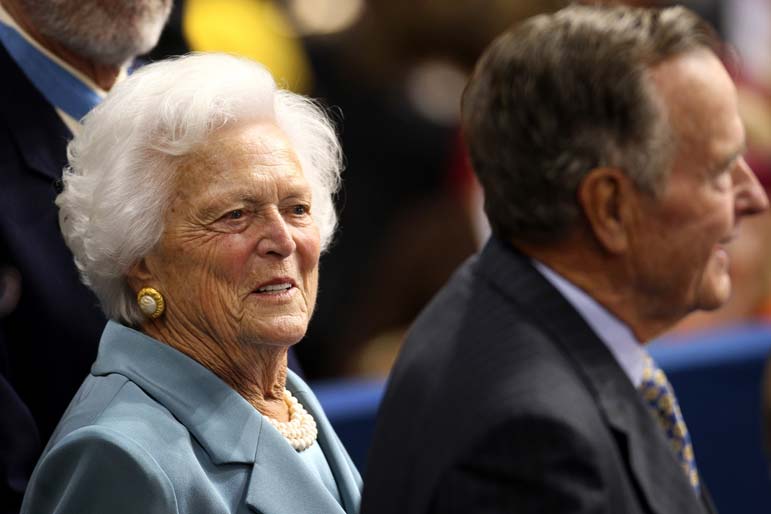 In the early 1980s, I did a lot of advance work for Vice President George H.W. Bush. Routinely, Barbara Bush would be on the trip, and I would often be assigned to manage part of her schedule. Not wanting to be presumptuous, I always made it a point to introduce myself to Mrs. Bush. I have a vivid memory of when that practice came to an end.

We were at an event in New Jersey, and as I began my customary introduction, Mrs. Bush matter-of-factly cut me off and said, "I'm not senile, I know who you are. You don't have to introduce yourself. Just say hello." She didn't say it in a tender way while patting my hand. She was clearly a little agitated. In retrospect, I guess there was a time that whenever she saw me, she must have thought,

Here comes that nitwit who keeps introducing himself to me. I fretted for days that I would be blacklisted or that I was somehow persona non grata with Mrs. Bush. But instead, that exchange became something of a private joke between us that lasted for years.

It was a microcosm of who Mrs. Bush was and what she was about. For Mrs. Bush, honesty equaled respect. She was brash but endearing. She never wanted to be intimidating or aloof. Once you got past the shock of it all, you realized she was treating you as a colleague and as a normal person and she expected to be treated that way, too.

You could always assume Mrs. Bush knew what was going on in the news and within her orbit. She wanted a healthy familiarity among those who crossed paths with the Bushes. President Bush famously wrote thank-you notes, as did Mrs. Bush. But the real Bush magic was in the everyday courtesies that they always displayed but that are all too rare in Washington and in politics generally. Mrs. Bush knew your name - probably your parents' names, too - and she wanted to know when your next trip home was and what you were reading.

She had an easy, human quality about her that many today do not even attempt as politics has become more rehearsed and defensive. Her overtures to the minions were never forced. What she said was what she meant, and she expected you to do the same.

You always knew where you stood with Mrs. Bush. She conveyed an attitude that signaled we were all in this together. She was approachable and friendly but without the sugar - much less the saccharin that is in great supply these days among political figures, particularly among spouses. She was, as my Post colleague Karen Tumulty wrote, "as authentic as her pearls were fake."

Political life is often harsh. Life in the White House is a swirl of airplanes and blue drapes, crowded elevators and grasping supporters, running late and hours on your feet. Mrs. Bush was the best at never appearing frazzled. She oozed calm and dignity. She liked some gossip from time to time and never much wanted to talk about the polls or how the races were going for the next cycle. She preferred learning about those around her.

So much of what was normal about Mrs. Bush is evaporating from our politics today. The Bushes didn't live in permanent campaign mode. And in Mrs. Bush's case, I expect she didn't think it was useful to do so. The best politics to her was probably one-on-one honesty and naturally taking an interest in those she came across. I hope someone writes a great book about Mrs. Bush; it would inform a lot of political figures who think they have to wear a mask and present themselves as something they are not.

Anyone who wants to connect with people could learn a lot from Barbara Bush.