Syria's president must release all of his American hostages 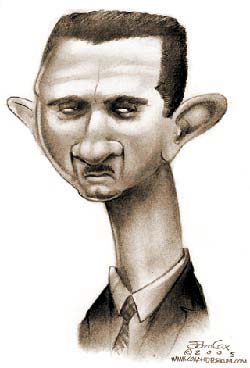 President Donald Trump has worked successfully to secure the release of many American hostages held abroad. But Americans might be surprised to know that Syria's Assad regime likely holds more American hostages than any state or nonstate actor, according to officials, activists and the families of these missing Americans.

Before U.S. troops leave Syria, before the United States accepts any political settlement to the Syrian crisis, before any U.S. aid flows for reconstruction - President Bashar al-Assad must return all American citizens he is holding in his prisons and account for the one he allegedly murdered.

There are "around half a dozen" American citizens missing in Syria and suspected to be held by the Assad regime, according to a senior administration official, who requested anonymity to discuss sensitive matters. One is journalist Austin Tice, missing since 2012; the U.S. government has said publicly it believes the Assad regime is holding Tice. The other known cases are Syrian Americans, none of whom the regime has acknowledged detaining, the official said.

"There are a number of Syrian American dual citizens that went missing in regime-held areas that the U.S. government is tracking and we are engaging with diplomatic partners in an effort to secure their safe return from Syria," the official said.

The exact number is classified, and there may be cases the U.S. government is still not aware of. Almost all engagement with the regime on this topic is conducted through the Czech ambassador in Syria. The Czech Republic has represented U.S. diplomatic interests in Syria since the closing of the U.S. Embassy there in 2012.

Last month, President Trump told reporters that he is going to work on securing the release of multiple American hostages in Syria.

Referring to his success in freeing earlier hostages from North Korea, Egypt, Turkey and elsewhere, the president said: "I'm 19 and 0, and I am now starting [on] the Syria hostages. Yes. And I have a very good record."

Officials confirmed that the president and his senior team are focused on returning Americans from Syria. The effort is led by special presidential envoy for hostage affairs Robert O'Brien, who was brought on last year to raise the level of attention and activity on the problem.

Trump's 19-0 tally includes Otto Warmbier, who was returned from North Korea in 2017 in a coma only to die a few days later. Trump was criticized last week for saying he believed Kim Jong Un's claim he was unaware of Warmbier's treatment. On Saturday, Trump said, "I love Otto."

The accurate tally in Syria would be Assad 1, Trump 0. The Assad regime is believed to have executed 26-year-old Illinois native Layla Shweikani in 2016 after a quick "trial" and didn't notify her family until late last year. In the wake of that tragedy, other families of Syrian Americans thought to be held by the Assad regime are speaking out.

In January, the family of 61-year-old Syrian American therapist Majd Kamalmaz, who was detained in a regime-held area in February 2017, decided to go public about his case. The Czech government told his family that the Syrian regime had acknowledged they were holding Kamalmaz, but then later said the Syrians had changed their story.

Kamalmaz was visiting family in Damascus when he was picked up at a regime checkpoint. He suffers from diabetes and other health problems; so far there's no information about his current condition. The Kamalmaz family held a rally last week in front of the White House, trying to raise awareness about their missing patriarch.

The Kamalmaz family also met with administration officials and lawmakers about the case, including Sen. Chuck Grassley, R-Iowa, and Rep. French Hill, R-Ark. The family has roots in both Iowa and Arkansas. Hill brought Kamalmaz's son, Khalid, to the president's State of the Union address last month.

"I'm not too political, but my father wasn't, either," Khalid Kamalmaz said. "They might be holding him as a political pawn, to try to use him for other deals. But he's just a humanitarian."

The names of the other Syrian Americans believed to be held by the Assad regime are kept secret in accordance with their families' wishes. And while each story is unique and information about them is scarce, the FBI, State Department and other agencies are all engaged in trying to track them down and bring them home.

Some believe that the American hostages must be included in any political negotiation with the Assad regime over the future status of Syria and its participation in international organizations as a member of the world community.

"The way this movie ends is in Geneva," said Sen. Lindsey Graham, R-S.C., who speaks to Trump often about Syria. "So we would expect that any solution to the Syria problem would include the return of all the American hostages."

The activists and families are hoping for action much, much sooner. They look at Trump's North Korea gambit and see a precedent that hostages should be released at the start of any negotiations, rather than as part of any final deal. They also know torture and murder are rampant in Assad's dungeons.

"Assad tortures to death countless men, women, children and elderly," said Mouaz Moustafa, executive director of the Syrian Emergency Task Force. "The fact that he holds multiple innocent American citizens in his dungeons is outrageous. They must all be brought home now."

Assad should be on notice that the U.S. government and the American people are tracking his imprisonment of Americans and he will be held personally responsible for their treatment and their safe return. If Assad wants the United States to leave Syria, he must release all of his Americans hostages first.