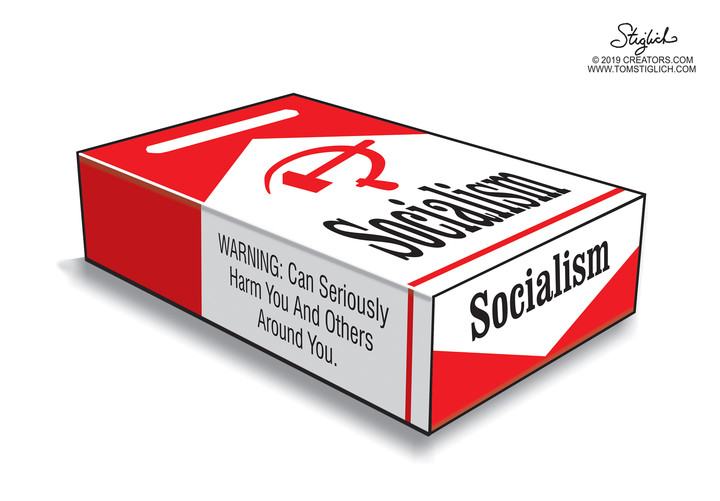 As the Democrats careen to the left (and over a cliff), it should not be surprising that their allied "fact-checkers" are running alongside them, trying to "correct" any negative impressions. "Be wary of politicians crying socialism," warned Washington Post "fact-checker" Glenn Kessler recently.


Kessler cited President Trump, who said in his speech at the Conservative Political Action Conference, "Socialism is not about the environment. It's not about justice. It is not about virtue. Socialism is about only one thing: It's called power for the ruling class."


1. Failures aren't really socialism. Everyone knows this golden oldie. The Nazis weren't socialists, even if they did call themselves the Nationalist Socialist German Workers' Party. The Soviets weren't really socialists, either. They just lived in the Union of Soviet Socialist Republics. "Fascism, National Socialism (the Nazis) and Soviet Communism emerged as dictatorships that eventually ran aground because they were unsustainable," he wrote. Insert laugh track.

The only new spin is this: "The causes for Venezuela's downfall are complex." Venezuela's headfirst dive into the socialist pond is a debatable proposition? Ask the people eating out of garbage trucks. We recall then-NBC anchor John Chancellor's ridiculous commentary about the USSR as it collapsed in 1991: "The problem isn't communism. Nobody even talked about communism this week. The problem is shortages."


Socialism doesn't always turn into dictatorship, Kessler protested. But that's not what Trump said. He said the "ruling class" gets the power. Just as New York Mayor Bill de Blasio recently said that "there's plenty of money in the world. ... It's just in the wrong hands." Socialists demand they be put in the hands of the state.


2. Western Europe should be emulated. Kessler then turned to Meagan Day, a leader of the Democratic Socialists of America, and how the DSA website touts Sweden's "comprehensive welfare state" and the French day care system. Day complains "Medicare-for-all" isn't socialist enough, that America needs a National Health Service (NHS) like Britain.


Uh-oh. Those "facts" just aren't on her side. Last fall, the socialist newspaper The Guardian reported, "NHS suffering worst ever staff and cash crisis, figures show." The number of staff vacancies across the NHS in England "has hit a record high while NHS bosses have disclosed for the first time the service's underlying deficit built up over recent years — 4.3 billion pounds."


Across England, they were short almost 12,000 doctors and more than 41,000 nurses. "Experts warned that NHS understaffing was so widespread that it was becoming a 'national emergency,'" The Guardian said.


That's before we talk about rationing health care, as the NHS talks about denying care to the elderly and undeserving citizens who smoke or are obese. The biggest socialist joke is that it provides "health care for all." Fact-check that, Kessler.


3. Then there's this old chestnut from Kessler: "Ideas once decried as socialist over time have become embraced by Americans." He goes straight to when Ronald Reagan in 1961 spoke out against creating Medicare: "'One of the traditional methods of imposing statism or socialism on a people has been by way of medicine,' he told radio listeners, warning that doctors would lose their freedoms."


Kessler made a serious admission: "Of course, if the DSA ultimately succeeds in creating a British-style health system, some might argue that Reagan's 1961 warning turned out to be prescient."


Yes, that's right. That's where the Democrats shamelessly propose to take us. But, hey, it's not socialism.