How we encourage mass murder 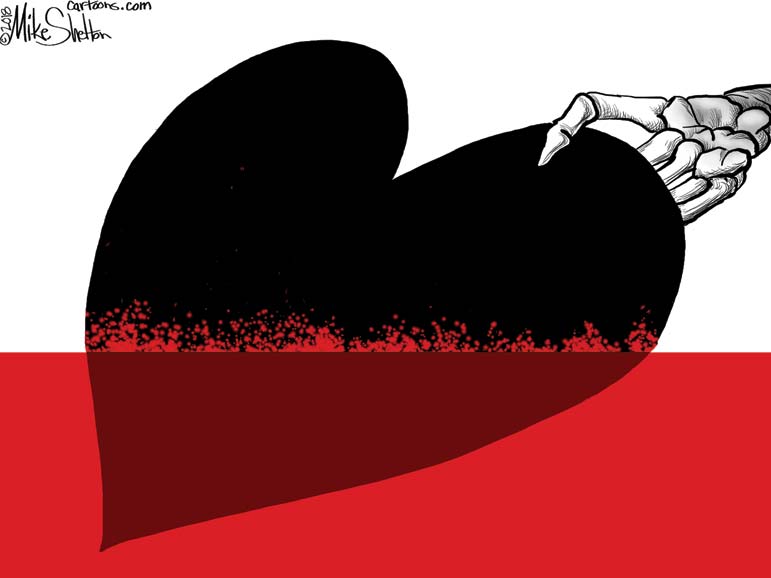 What makes a man walk into a house of worship and slaughter innocents under the eyes of God? We should perhaps be grateful that we'll never really understand it; glad that the ordinary human mind cannot even imagine the urge toward such wanton brutality.

All we can really do is grieve with the families of the 49 people who lost their lives Friday in the mass shootings at two New Zealand mosques -- and, of course, ask ourselves what we can do to ensure that the rare evil sociopaths who can conceive such desires never get a chance to carry them out.

If the attack had happened in the United States, the conversation would have quickly turned to gun control. But New Zealand already has a gun-control regime that is much stricter than anything proposed in the wake of American mass shootings. Undoubtedly it will get stricter still, and perhaps this will make some marginal difference. But that will still leave us asking "What else can we do?"

There is an answer to that question, but it is uncomfortable, and perhaps unworkable: Stop publicizing mass shootings.


Every time a mass shooting makes the news, the news media are quick to hunt for root causes. Coincidentally, these almost always mirror the reporters' and editors' ideological preoccupations: gun-control laws and gun culture, the inadequacy of resources for treating mental-health problems, Islamic fundamentalism or white nationalism, the alienation of young men cast adrift in modern society. Strangely, the media's own role in perpetuating this unholy cycle of violence seldom comes up.

It's long been known that acts of violence inspire copycats, and the more the murders capture the public's attention, the more copycats they can and will inspire. Many mass shooters have been inspired by the media trail left behind by earlier psychopaths. They pore over the endless video record, the lengthy profiles, the anxious chatter on social media. And instead of being sickened by the carnage, they're attracted to what it offers them: power over cowering victims; a face and a name that inspire terror in millions; an infamous legacy.

Many commentators, wondering why mass shootings became so common in the late 20th century, have pointed to various cultural and economic developments. They might better have pointed to cable news, which ensured that disaffected losers with hypertrophied egos and shriveled souls became the non-stop talk of the nation -- in every nation, and most of the world's 6,500 languages. The wall-to-wall coverage teaches men who may not be able to get a job or a girlfriend that nonetheless, in something under an hour, they can become Genghis Khan.

And when they pick up a gun and turn themselves into a one-man barbarian horde, we in the media rush in with the cameras, the profiles and the non-stop commentary that will inevitably inspire some future Attila the Hun.

No matter your opinions about gun control, or funding mental-health treatment, or softening the anomie of the modern world, here's an intervention to consider: Stop giving them what they want.

Don't watch their videos, or even speak their names. Media companies should decline to give their horrible crimes extensive coverage, and audiences should decline to consume it. Give their atrocities no more attention than a highway car wreck, and let their deeds disappear onto two column inches on page A24 of the newspaper or, better yet, into the transcripts of an unremarked court trial.

In other words, let's pretend it's not happening: While the axioms against ignoring elephants in the living room may be generally wise, this is the rare case where strategic obliviousness might actually cause the beast to leave, or at least visit much less often.

There are, of course, many objections to this idea. One is that refusing to cover these shootings as the major outrages they are would slight the memories of the victims. Another is that in America, at least, it would deprive activists against gun violence of a message that's an effective tool in galvanizing public opinion. Then there's the problem that, given modern communications technology, it might be impossible to mount a successful tacit conspiracy against the barbarians.

I don't dismiss any of these objections; all are valid, and perhaps overwhelming. But I will observe that we should do everything we can think of to stop mass shootings, and what we've done so far obviously haven't worked as well as we'd hoped. If we want to prevent the unthinkable, we need to be willing to at least think about the merely uncomfortable.