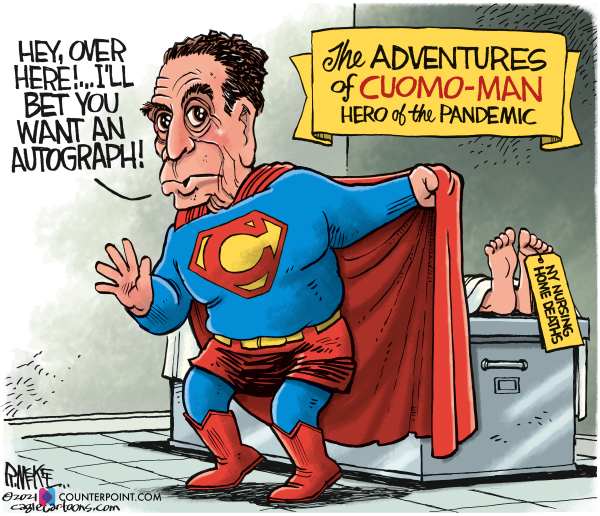 Throughout the pandemic, the media have been excoriatingly harsh on a governor who was slow to act, unnecessarily endangered the lives of the elderly, alienated experts and cooked the numbers.

They just thought the governor in question was Florida's Ron DeSantis, rather than New York's Andrew Cuomo.

After it has become clear that Cuomo's handling of the pandemic was not just criminal in the metaphorical sense, but perhaps in the literal sense, the press has begun, only reluctantly and belatedly, to abandon its long-running Cuomo hagiography.

It never made any sense to lionize Cuomo at the expense of DeSantis, except that one had a "D" after his name, and the other didn't, and one hated President Donald Trump, and the other didn't. The national media also labor under the assumption that New York must be competent, while the Sunshine State is the preserve of the embarrassingly boorish "Florida Man."

Finally, the media loved the way Cuomo talked about the pandemic at his take-charge news conferences. This was taken as the opposite of Trump's approach, which it was — Cuomo talked a good game, while utterly botching the substance of the response, while Trump talked irresponsibly about the pandemic, while handling the substance pretty well (or, certainly, not as badly as advertised).

All this meant that the press made both Cuomo and DeSantis into something they weren't — a hero and a villain, respectively — when it should have been obvious all along that this wasn't remotely justified.

From the outset of the pandemic, New York has had the highest number of deaths of any state and still does (47,000), and the second-highest deaths-per-million of anywhere in the country. In contrast, Florida is right around the national average for deaths-per-million. Journalists brushed right by these top-line numbers in the interest of their tendentious narrative-building.

They erupted in outrage when DeSantis was allegedly slow to close the beaches last March, but they didn't dwell much on Cuomo saying, when the virus was already spreading throughout his state, "The facts defeat fear. Because the reality is reassuring."

They claimed DeSantis was rejecting the "science" by, among other things, pushing to reopen the schools, an approach that has proved out. Meanwhile, experts have fled the New York public-health bureaucracy in response to Cuomo's high-handedness.

They bought the bogus story of a Florida data manager who was supposedly persecuted for blowing the whistle on the state's manipulation of its COVID numbers, when, of course, this is exactly what Cuomo was doing.

And so the media's anointed hero of the pandemic — who wrote a book on his own exemplary pandemic response, who won an Emmy, who was elevated to an authority with the standing to comment on how the country was handling the novel coronavirus — is facing calls to resign or face impeachment and is the subject of multiple investigations, while his routine bullying of critics is now out in the open.

Not only are none of these things happening to DeSantis, his policy of avoiding strict lockdowns, which occasioned so much criticism, has avoided the educational and economic downsides of Cuomo's approach. According to Florida data, the state offers more in-person education than any other in the nation, and it has a lower unemployment rate than the national average and other populous states. This matters greatly to the well-being of Floridians.

All this said, the virus has presented enormous and excruciating challenges to policymakers around the country. It isn't healthy to be overly invested in Red State versus Blue State comparisons. But the media gleefully went all-in on this game — and managed to pump up the wrong governor and run down the wrong one, in a failure for the ages.