America is in dire danger with economic illiterates gaining power 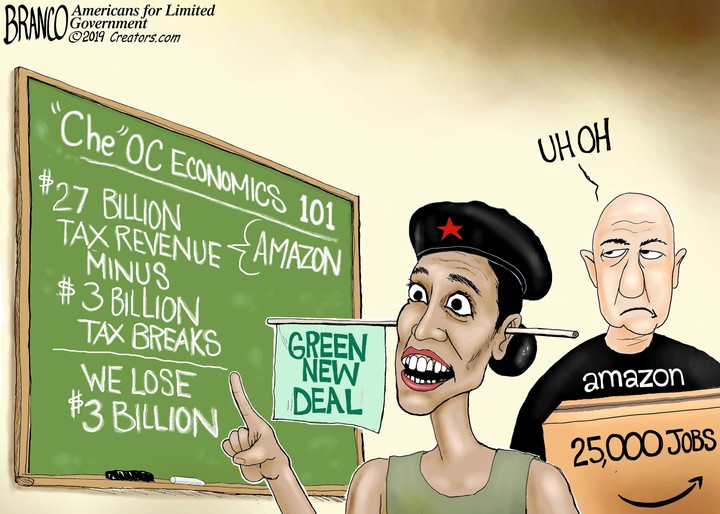 The left complains that conservatives are "obsessing" over Alexandria Ocasio-Cortez. Well, there is a reason for that: Ocasio-Cortez is driving the agenda of today's Democratic Party -- and her economic illiteracy is dangerous.

Case in point: Last week, Ocasio-Cortez celebrated the tanking of a deal negotiated by her fellow Democrats in which Amazon promised to build a new headquarters in Long Island City, New York, right next to her congressional district. Amazon's departure cost the city between 25,000 and 40,000 new jobs. Forget the tech workers whom Amazon would have employed. Gone are all the unionized construction jobs to build the headquarters, as well as thousands of jobs created by all the small businesses -- restaurants, bodegas, dry cleaners and food carts -- that were preparing to open or expand to serve Amazon employees. They are devastated by Amazon's withdrawal.

Ocasio-Cortez was not disturbed at all. "We were subsidizing those jobs," she said. "Frankly, if we were willing to give away $3 billion for this deal, we could invest those $3 billion in our district, ourselves, if we wanted to. We could hire out more teachers. We can fix our subways. We can put a lot of people to work for that amount of money if we wanted to."

No, you can't. Ocasio-Cortez does not seem to realize that New York does not have $3 billion in cash sitting around waiting to be spent on her socialist dreams. The subsidies to Amazon were tax incentives, not cash payouts. It is Amazon's money, which New York agreed to make tax-exempt, so the company would invest it in building its new headquarters, hiring new workers and generating tens of billions in new tax revenue.


As New York Mayor Bill de Blasio explained, the Amazon deal would have produced "$27 billion in new tax revenue to fuel priorities from transit to affordable housing -- a nine-fold return on the taxes the city and state were prepared to forgo to win the headquarters." Unlike Ocasio-Cortez's imaginary $3 billion slush fund, that is real money that actually could have been used to hire teachers, fix subways and put people to work. With Amazon leaving New York, that $27 billion leaves with it. Genius.

Ocasio-Cortez does not seem to understand that by helping to drive Amazon away, she did not save New York $3 billion; she cost New York $27 billion. There is a difference between having bad ideas and not grasping basic facts. Reasonable people can disagree about whether New York should have offered Amazon $3 billion in tax incentives -- or anything at all -- to build its headquarters in the city. But that is different from not understanding that New York is not writing a $3 billion check to Amazon.

Sadly, Ocasio-Cortez doesn't learn from her mistakes. She made the same kind of error in December when she tweeted, "$21 TRILLION of Pentagon financial transactions 'could not be traced, documented, or explained.' $21T in Pentagon accounting errors. Medicare for All costs ~$32T. That means 66% of Medicare for All could have been funded already by the Pentagon." But, as Pentagon spokesman Christopher Sherwood told The Post, "DoD hasn't received $21 trillion in (nominal) appropriated funding across the entirety of American history." Once again, Ocasio-Cortez did not grasp that the Pentagon did not have a magic pile of $21 trillion in cash sitting in a vault somewhere.


Her economic illiteracy matters because she is the principal author of the Green New Deal, which has been endorsed by most of the leading Democratic candidates for president. From this unschooled mind has sprung the most ambitious plan for government intervention in the economy since Vladimir Ilyich Lenin's train pulled into Petrograd's Finland Station.

If Ocasio-Cortez doesn't understand how tax subsidies work, how can she be trusted to plan the federal takeover of the health-care, energy and transportation sectors of our economy? Think she and her allies have any idea how to, as her now infamous talking points put it, upgrade or replace "every building in America" ... or replace "every combustible-engine vehicle" ... or connect every corner of America with high-speed rail ... or replace all fossil-fuel energy with alternative energy sources -- all in 10 years' time? Apparently, they think we just have to find all the magic pots of cash the government is hiding.

When this kind of ignorance is driving policymaking in Washington, America is in profound danger. Amazon left New York because Ocasio-Cortez and her fellow democratic socialists created a hostile environment in the city. And if Ocasio-Cortez has her way, Democrats are going to do to the rest of America what they just did to New York.