Distinguishing between fact and fantasy: Bad actor in Hollywood-style script must awaken us to reality 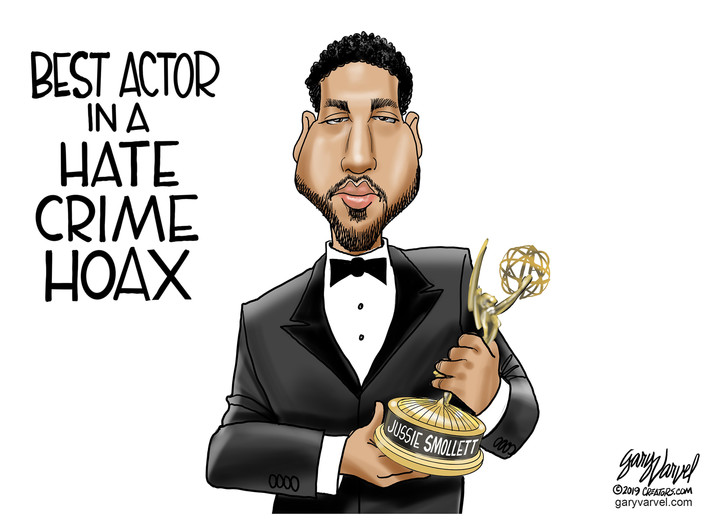 On Jan. 29, Jussie Smollett, a gay African-American actor, reported to Chicago police that he had been the victim of a vicious hate crime. As my colleague Nana Efua Mumford has noted, the disturbing details were almost cinematic, like an episode of "Empire," Smollett's television show. Two masked assailants not only made homophobic, racist slurs, according to Smollett, but also poured an unknown chemical on him and hung a noose around his neck. One of the attackers shouted, "This is MAGA country" -- as in the Trumpian phrase "Make America Great Again."

That theatricality, and the timeliness of the political message, ensured the incident would catch the public's imagination. Now, evidence is emerging that the episode may in fact have been scripted, by Smollett himself. On Wednesday evening, Chicago police announced that Smollet has been charged with disorderly conduct for filing a false police report. Smollett, through his attorneys, has denied participating in a hoax.

Regardless of how the Smollett episode ultimately turns out, it provides a useful reminder: The more a crime report sounds like a movie, the more suspicious you should be.

In Bill James' 2011 book, "Popular Crime: Reflections on the Celebration of Violence," he notes of serial killers that "one can almost say accurately that every serial killer in fiction is more organized than any serial killer in real life." Another way to put it: Fictional killers are unrealistically legible to outside viewers. In real life, after investigating for a year and a half, Las Vegas police still have no idea why Stephen Paddock committed the deadliest mass shooting in U.S. history.


James' dictum applies equally well to other sorts of crimes, particularly when the details seem to serve a larger political narrative.

Hollywood strips away ambiguity and clarifies murky motives, and endows criminals with more planning ability than they usually possess. It heightens dramatic contrasts between villain and victim, and festoons the crime with eye-catching symbolic detail. Real criminals, by contrast, rarely have a simple discernible motive or a narrative arc. Nor can they generally work their crimes up for maximum dramatic effect, because, unlike actors playing criminals on a closed movie set, the real ones need to worry about getting caught.

A look at the most extreme form of hate crimes -- domestic right-wing terrorist attacks -- reveals the distance between reality and what movies lead us to expect. There are relatively few of what we might call Hollywood Crimes, such as Timothy McVeigh's bombing of a federal building in Oklahoma City in 1995 or Dylann Roof's 2015 massacre in an African-American church at Charleston, S.C. Often, the information about the incidents and attackers is so convoluted that it's not even entirely clear they were primarily motivated by politics.

Or what politics motivate them. Remember the Pulse nightclub shooting in Orlando in 2016? It was initially assumed to be an episode of right-wing homophobic violence. Then the shooter turned out to be an Islamic State follower who may not even have realized he had targeted a gay nightclub until he got there. Real crime, like real life, is complicated and confusing.

And so our spidey sense should tingle when alleged crimes seem ready for prime time. The perpetrators of racial and sexual violence aren't writing a manifesto; they're committing assault. Those assaults will rarely be structured to deliver a simple, on-point story: The assault on a lone victim by stereotypically powerful perpetrators; the attackers who helpfully reveal their one-note motive and then shut up; the abundance of stunning detail; the unmistakable connection to a larger political narrative. Or the victim who, like an actor, sustains minimal physical injuries from an apparently gory episode.

These elements should have urged us to caution in the Smollett case right from the start. As they should have in famous recent cases we now know were hoaxes: the confabulated rape accusations against the Duke University men's lacrosse team in 2006 and a University of Virginia fraternity in 2014, or the rash of slightly-too-on-the-nose hate crime reports following Donald Trump's election.

Paradoxically, though, bogus attacks may feel more authentic than actual ones because, luckily, most of us know these extreme forms of violence only from what we've seen on-screen. We amplify stories that tickle our narrative neurons, overlooking more complicated real attacks where the significance must be explained.

This does a grave disservice to real victims. If we focus on the stories that give us the narratives we're looking for, we're going to end up with a disproportionate amount of fiction. And when those widely publicized stories come unglued, we'll inadvertently feed another false narrative: that racial and sexual violence are fake news, instead of all-too-real problems.