In attacking proposed Kavanaugh replacement, Dems are arguing against progress -- in more ways than one 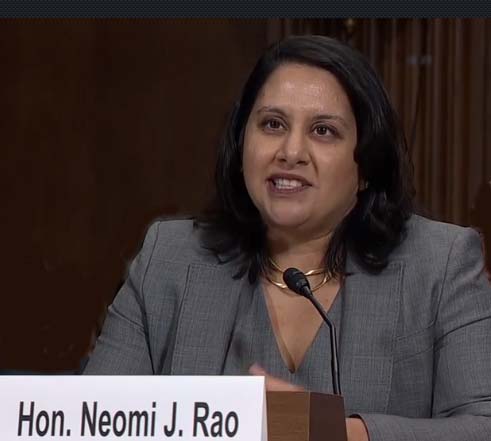 It has been four months since Brett M. Kavanaugh was sworn in as a Supreme Court justice, after a confirmation process that transfixed the nation with allegations of a decades-old sexual assault that could be neither conclusively proved nor definitively refuted. Now, the proposed nominee to his old seat on the U.S. Court of Appeals for the D.C. Circuit is being targeted by a similar sort of allegation -- in the same family, but distantly related.

Neomi Rao is eminently qualified to be a judge; the former law professor has worked in both Congress and the White House, in addition to her academic experience. She has also long leaned right; when she was in college, and for some time after, she wrote right-leaning opinion pieces. Progressive groups have seized on these old writings as evidence of racial insensitivity and hostility to sexual-assault survivors, and in Rao's confirmation hearing Tuesday, Democratic senators called her to account for them.

I'm tempted to write "Democrats are reduced to pointless obstructionism," but "obstructionism" implies the ability to obstruct. Senate Democrats lack that ability, having done away with the filibuster for lower-court judicial nominations when they were in control. Thus they are reduced even further, to "pointless mudslinging."

Yet "pointless" doesn't mean "harmless." The Democratic senators' juvenile tactics will not stop Rao's confirmation, but they are lowering the already debased national discourse.


Rao is now 45 years old, solidly middle-aged. To reach middle age, one must first pass through an earlier stage of simultaneously knowing very little about the world while believing oneself to understand it completely. Youthful folly is particularly unfortunate in budding writers, who inevitably commit their stupidity to the page. If they write for publication -- rather than privately composing the worst novel ever written in the English language, as I did at that age -- their silliness will linger for posterity to sample.

Rao had an obnoxious tendency, common to young writers, of dismissing her opponents with some bit of glib nastiness rather than engaging with them. Since she frequently wrote to oppose what we now call identity politics, this comes off as nasty indeed. More than once, she derided social justice politics as a pose, or -- in the case of scholars Cornel West and Henry Louis Gates Jr. -- "a hot, money-making issue."

But, frankly, Rao's college writing wasn't nearly as bad as it could have been. It wasn't even as bad as I expected from early media coverage.

And some of what her antagonists have taken issue with is quite reasonable. An article arguing that it is sexist and unjust to presume that when two drunk college students have sex, the man is automatically at fault has somehow been recast as "blaming the victim" because, in the course of her argument, Rao suggested that women (like men) have some agency in deciding whether to get drunk. Yet this presumption does exist, and moreover, is still common, and still sexist.

Yet say that all her writing had been as bad as it sounded when quoted out of context -- so what? A quarter-century has passed since she wrote those words. Society's views have evolved on race, gender and sexual orientation, and Rao says her views have evolved, too. If she's lying, there should presumably be some less elderly, and more relevant, evidence of deception.

To insist that Rao's writings from college are evidence of eternal and immutable bad character is to insist that no one ever grows kinder or wiser. This may well be true of the mudslingers, but most people are more mentally flexible.

Of course, if the latter-day inquisitors get their way, and everyone is liable to future prosecution for views they no longer hold, we might all become somewhat less cognitively supple. Consider the message that progressives are sending to anyone hesitant about some proposed social change: "We want equality and justice. Also, after we win, we want to punish anyone who disagrees with us right now."

Future punishees could be forgiven for being reluctant to support any such victory. Moreover, at the beginning of any major campaign for social change, those people will definitionally be in the majority; if they weren't, the campaign would be unnecessary.

There's a certain irony in watching progressive groups deploy tactics that are anti-progress in every sense of the word. But all the more reason for everyone else to keep working for real progress, and all the more reason to let Neomi Rao's long-ago opinions be written off to youth, and to keep the debate focused on issues that actually matter.