Tillerson must bridge the gap between his workforce, the White House 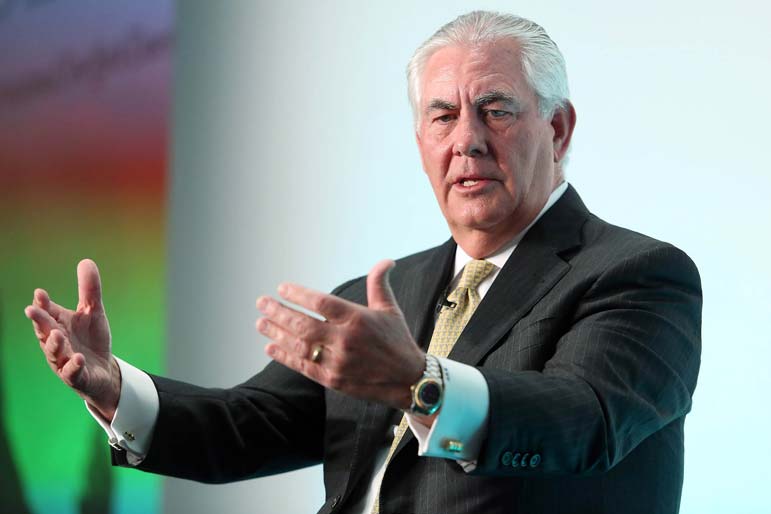 One of Secretary of State Rex Tillerson's most crucial missions is to ensure that the State Department he leads becomes an integral and influential part of the Trump administration and not an outpost of opposition to a White House set on radically altering U.S. foreign policy priorities. That strategy is playing out in his selection of key officials to manage his agency, including his new chief of staff.

The State Department workforce has good reason to be concerned about its relevance in Trump's world. Trump's executive order on immigration was crafted without significant State Department input, and Tillerson was reportedly baffled about not being consulted. When more than 900 department employees signed a dissent cable about the order, White House press secretary Sean Spicer said they should "either get with the program or they can go."

Enter Margaret Peterlin, who State Department officials confirmed is Tillerson's new chief of staff. Peterlin was with Trump before Tillerson came on to the scene. She helped guide Tillerson through his confirmation process, and the two developed a rapport. Now she will have the most important job at the State Department when it comes to managing the relationship between the secretary and the thousands of bureaucrats he leads.

Peterlin has a wealth of government and private-sector experience. After distinguished service as a naval officer, she graduated from the University of Chicago Law School and clerked for the U.S. Court of Appeals for the 5th Circuit. She then went to work for House Majority Leader Dick Armey, R-Tex., just days before the 9/11 attacks. Afterward, she helped negotiate and draft key pieces of national security legislation, including the authorization for the use of force in Afghanistan, the Patriot Act and the legislation that established the Department of Homeland Security.

"She's very substance- and policy- focused. She's not necessarily a political person," said Brian Gunderson, a State Department chief of staff for Condoleezza Rice who worked with Peterlin in the House.

Following a stint as legislative counsel and national security adviser for then-House Speaker Dennis Hastert, Peterlin moved over to the Commerce Department, where she served as the No. 2 official in the Patent and Trademark Office. There, she led delegations representing the U.S. government to countries all over the world.

"A good part of that job is focused on international policy and straight-up diplomacy," said Jon Dudas, who was director of the patent office at the time.

After she left government, Peterlin worked in the private sector, most recently for XLP Capital, a technology- focused investment firm.

The chief of staff at the State Department is the secretary's "ambassador to the institution," said David Wade, who was chief of staff to Secretary of State John F. Kerry. Tillerson's selection of Peterlin "sends a serious and reassuring signal to the building," he said.

That reassurance is badly needed. Most of the senior leadership team of the State Department was asked to resign during the transition before replacements were found, leaving large vacuums in administration. "The Trump administration has made a series of missteps with the State Department," said Nick Burns, a former undersecretary of state for political affairs. "Our foreign and civil service are professional and loyal. All they want to do is serve, but the White House has to show them respect."

Tillerson's first remarks to his employees this month acknowledged the problem at hand. "I know this was a hotly contested election and we do not all feel the same way about the outcome," he said. "Each of us is entitled to the expression of our political beliefs, but we cannot let our personal convictions overwhelm our ability to work as one team."

Now all eyes in Foggy Bottom are focused on who Trump will nominate for the other crucial role, deputy secretary of state. Last week, Trump rejected the candidate Tillerson was reportedly pushing for the job, former State Department and White House official Elliott Abrams. They both met with Trump at the White House last week, but Trump reportedly couldn't forgive Abrams for speaking out against him during the campaign.

Abrams would have entered the State Department with a range of policy and management experience and would have found a workforce that would mostly welcome him with open arms. Now Tillerson's effort to build a team that can bridge the gap between the diplomatic corps and the White House leadership is delayed.

Tillerson has the experience to know he must heal the wounds between the professionals he leads and the president he serves. The White House should let Tillerson bring in people who can help him bring Foggy Bottom into the fold, rather than allow it to become another part of the opposition.