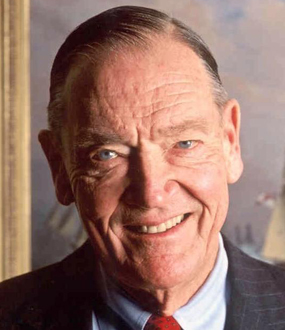 Unless you work in finance, you've probably never heard of John Bogle. But if you have a retirement account, you nonetheless owe him a large debt of gratitude.


Bogle, who died earlier this month at age 89, was responsible for one of the most remarkable financial innovations in modern history: the index fund, a low-cost mutual fund that doesn't try to actively manage investor money but simply buys stocks or bonds in proportion to their representation in a target index, such as the S&P 500.


Bogle didn't invent the idea -- that credit should go to Nobel prize-winning economist Paul A. Samuelson -- but Vanguard, the company Bogle founded, turned an academic subject into a financial product available to ordinary consumers.


Before Bogle, the best option those investors had was a mutual fund, run by a manager who chose individual investments. On average, it turned out, those actively managed mutual funds actually underperform the broader market, once the various costs of all that management activity, such as trading fees and managerial salaries, have been taken into account.


Vanguard promised something different: The company wouldn't try to manage your money but would simply buy whatever was in a broad market index. You couldn't outperform the market, but you couldn't underperform it either, and you could save a bundle on fees. This was a much better deal, which is why index funds now hold more than 17 percent of the U.S. stock market.


Yet revolutions, even benign ones, have a way of devouring their children. You see, there is a marvelous paradox about financial markets: Investment strategies frequently work only because most people believe they don't.


Say you have a strategy that will reliably generate returns higher than the S&P 500, with less risk. That's great news ... until someone notices all that money you're making and tries to copy you. Soon a legion of imitators is bidding up the prices of the assets you want to buy, competing your excess returns down to nothing.


In the case of index funds, the problem isn't that too many index funds bid up the prices of the underlying stocks; it's that an index fund strategy implicitly assumes someone's out there figuring out what those prices should be. However useless active managers might be to their clients, they're still doing the market a valuable service, ensuring that stock market prices bear some relationship, however imperfect, with what's going on at publicly traded companies. Without that work, indexing could become a lot riskier.


As his invention grew in market share, even Bogle began to wonder if that wasn't a problem, not because of the potential for pricing anomalies but for the effect that it would have on corporate governance. Bogle noted in The Wall Street Journal last year that just three companies dominate index funds, collectively controlling 81 percent of index fund assets; Vanguard alone controls 51 percent. If the popularity of index funds keeps rising, a handful of investment managers could end up with a controlling share of most of the major companies in the United States.

It's hard to say exactly what would happen next, but two worrying possibilities immediately present themselves. The first is "business as usual." The passive managers of index funds don't earn enough in fees to justify spending time on corporate oversight, so they've generally left that to active managers. As active management declines, that might leave corporate managers free to get up to all sorts of mischief -- especially since the rules of indexing mean that investors won't sell unless you run things so badly that the company implodes and drops out of the index.


But it could be even worse if index fund managers did decide to get more involved, because their supervision might look far different from the supervision traditionally practiced by activist shareholders.


An individual shareholder with stock in an automaker wants that company competing hard against all other automakers. But what if a handful of index funds owned controlling shares of all the automakers? Wouldn't it be more relaxing for everyone to stop competing so hard on price and quality?


That kind of corporate power isn't good for consumers, or for America -- even though indexing remains by far the best option for individual investors.


And so the man who simplified finance for ordinary people has left us an extraordinarily complicated legacy: The product he invented is so very good that it might eventually become really bad. And the bigger it gets, the more likely it is to be destroyed by its own success.