It Could Happen to You

This fit young woman was having strokes, and doctors didn't know why 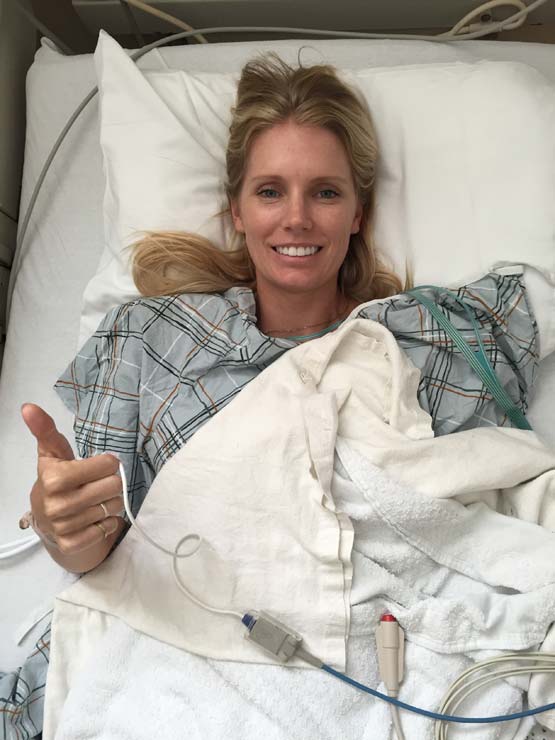 As Diana Hardeman climbed into a New York City taxi with her boyfriend around midnight on May 31, she suddenly realized she had no idea where to tell the driver to go.

The 33-year-old knew she had to get to a hospital - and fast. Hardeman was fairly sure she had just had a stroke, her second in less than three years. But she had never asked the neurologist she had seen after the first stroke where she should head in the event of a recurrence.

Rattled, she opted for the only place she could think of: a large public hospital not far from her apartment.

Hardeman emerged from her two-day stay with more questions than answers. Doctors could not determine why the otherwise healthy and unusually fit young woman with no apparent risk factors - a devotee of yoga, strenuous hikes and marathons - had suffered strokes in the first place.

Hardeman, who owns MilkMade, an artisanal ice cream company in Brooklyn, decided that her life depended on an answer. So far, she had suffered no permanent impairment. Next time, she knew, she might not be so lucky.

So she temporarily shuttered her burgeoning business and plunged into an unfamiliar world. Guided by her father, a doctor who specializes in critical care, Hardeman plowed through dense articles in medical journals, sought out a variety of experts and amassed and organized a growing stack of medical records.

In her case there were options, not absolutes. Ultimately it was up to Hardeman, who has an MBA degree, to weigh the conflicting advice of experts and decide what to do.

"I had to become the CEO of my own health," she said.

A few days before Christmas in 2013, Hardeman flew to southern California for the holidays. She spent the morning of Dec. 22 surfing with her father. As she bent down to slather coconut oil on her legs after a shower, Hardeman suddenly felt profoundly weak. Her right arm went numb.

Unsure of what was happening, she walked out of the bathroom, sat on the floor of her bedroom and spoke to her boyfriend. "Only gibberish came out," she said.

"At first I thought, 'Am I dying?' " she recalled, as she discovered that the right side of her body was paralyzed. Hardeman's boyfriend telephoned her father, who had just left the house. He immediately returned and called an ambulance. Within 20 minutes, Hardeman, whose speech by then had returned to normal, was in the emergency room of the hospital where her father works. Forty-five minutes later, she received tPA, a drug used to treat ischemic strokes (those caused by a blood clot rather than a ruptured blood vessel in the brain), which must be administered within about three hours of an event.

"I was very lucky I was at my dad's hospital, which is a stroke center," she said, referring to institutions specially certified to treat acute strokes.

Hardeman was discharged on Christmas Day. Most of the feeling on her right side had returned, but some weakness lingered for several weeks.

Doctors had ruled out common causes of a stroke, including deep vein thrombosis, a blood clot that often forms in the legs. They discovered that Hardeman had a common heart defect called a PFO, or patent foramen ovale, a small hole in the wall between the two top chambers of the heart. The hole, present during fetal development, is supposed to close after birth, but sometimes doesn't. The condition is shared by an estimated 20 to 30 percent of the population and rarely causes problems; most people are unaware of it.

Tests also revealed that Hardeman had actually suffered two small strokes in different parts of the brain. Doctors decided that they appeared to be the result of a tiny tear in her left carotid artery, which supplies blood to the brain.

These tears can occur as a result of physical activity as the neck is hyperextended. Yoga, surfing, chiropractic manipulation or even having one's hair washed at a salon (dubbed "the beauty parlor stroke") are known to cause such tears.

Hardeman thought she might have suffered a tear as a result of her contorted position on a cramped cross-country flight several days earlier. She said she had awakened from a nap to find her head tilted to the left at an odd angle.

Doctors advised Hardeman to take aspirin and a blood thinner to prevent another stroke and to avoid exercise, including yoga, until further notice.

Back in New York, she consulted a neurologist, who advised her to continue taking medication. After a scan in February revealed nothing amiss involving her carotid artery, the neurologist cleared her to resume running and yoga. Within a few months, Hardeman said, she "felt great."

She continued taking a daily low-dose aspirin as a precaution. After three months on a blood thinner, she was told she no longer needed it.

"I felt very grateful about how this had all turned out," she said. The ice cream business she had started in her apartment several years earlier was flourishing. "I thought, 'Well, this was just a fluke.' I had gotten over the trepidation that this would happen again."

And then it did.

Around midnight last May 31, as Hardeman leaned over to plug in her computer, she felt a sudden weakness on her right side. Her face drooped and her speech was unintelligible.

"Oh, my G0D, it's happening again," she remembers thinking. Within 10 minutes she had recovered speech and sensation, and was in the cab en route to the hospital. Testing revealed this episode to be less serious than the first. Hardeman did not receive tPA because she had recovered by the time she reached the ER.

The second stroke puzzled the hospital team, who examined the records from the first, which Hardeman's boyfriend brought in the next day at her request.

They were skeptical that Hardeman had ever suffered an arterial tear the first time - there was no visible evidence on scans - and classified her stroke as cryptogenic, meaning its cause was unknown.

Cryptogenic strokes affect about 200,000 Americans younger than 55 each year. Among the causes are atrial fibrillation, an irregular heartbeat; inherited blood clotting disorders; and a PFO. Doctors advised Hardeman to follow up with her neurologist in an attempt to pinpoint the cause.

The neurologist prescribed the blood thinner Hardeman requested at the suggestion of her father, and referred her to a hematologist and a cardiologist.

Tests revealed a previously unknown condition: May-Thurner syndrome, a disorder in which a leg vein is compressed, promoting the development of problem clots. But specialists did not know whether this finding was unrelated to Hardeman's strokes or had helped cause them. The same was true of the PFO.

Hardeman's father contacted a prominent neurologist in Philadelphia with expertise in treating cryptogenic strokes; he agreed to see her for a second opinion.

The specialist recommended that she continue with her medication and strongly advised against an option that had been raised by another doctor: a procedure to close the hole. For years that had meant open heart surgery. But in the past 15 years, an outpatient endovascular procedure - in which a catheter containing miniature instruments is inserted into a blood vessel - has become popular. Experts are divided about its safety and effectiveness and whether it is superior to medication alone.

"I was really worried," Hardeman recalled. "I kept wondering, 'Am I going to be able to have kids? Am I going to be okay?' " She wasn't sure whether the procedure was the best option or whether it posed an unnecessary risk. Nor was there any consensus about what had caused her strokes in the first place.

Buffeted by contradictory advice, Hardeman contacted another expert, Carolyn Brockington, director of the stroke center at New York's Mount Sinai Hospital. Hardeman had met the vascular neurologist in 2014, when both appeared on a segment of the "Dr. Oz" TV show about young women and stroke.

" 'We're going to close the loop,' " Hardeman recalled Brockington telling her, which she found reassuring. Brockington said she suspected the strokes were caused by the PFO.

"She had both episodes after she leaned down," Brockington explained. "When you lean down, you change the pressure in your thorax," which can force a clot through the hole in the heart and into the brain, triggering a stroke. It was not clear whether Hardeman was at high risk for the development of problem clots because of her newly identified vein compression.

"Typically the treatment for a PFO is a blood thinner," Brockington said. But medication alone had not prevented a recurrence, and two strokes in a short period put Hardeman at risk for a recurrence.

Brockington recommended that Hardeman undergo the closure procedure, echoing a vascular surgeon at another hospital whom Hardeman had consulted. Complications can include an irregular heartbeat and a tear in the heart or blood vessels.

After conferring with her father, Hardeman decided it was worth the risk. In mid-August, an interventional cardiologist threaded a catheter through a large vein in Hardeman's groin to install a hole-plugging device in her heart.

Sedated but conscious, she watched the procedure on a monitor and went home three hours later. She now takes a daily aspirin and will continue on a blood thinner for several more months.

To Brockington, Hardeman's case underscores the importance of having stroke survivors consult a vascular neurologist who specializes in the treatment of stroke, not a general neurologist.

Hardeman said she feels fine and is immersed in expanding her business. The three months she spent sorting out her health, she added, taught her a lot.

While having a father who is a physician was invaluable, it ultimately fell to her to keep pushing for an answer and to decide what to do.

"I learned that I was the one who had to lead the case," she said. "The onus was totally on me to share information among doctors at different hospitals who had no ability to share records."

"Doctors don't say, 'Here's what you do,' " she observed. "There are possibilities, not certainties. "

Previously:
• With pain was so severe, he was afraid he was going to die. Some doctors didn't believe him. Others, couldn't -- or wouldn't -- help. Until one finally did
• A feeding tube kept her alive. Then a determined medical student figured out the problem
• Simple test proved that a teen with stomach pain wasn't a hypochondriac after all
• A mom's discovery about her daughter's odd teeth leads to a shocking revelation
• For more than two years, he lived with a diagnosis of fatal dementia. He never had it
• What caused a newborn twin's swollen legs