Still partners after
all these years

NEW YORK--- It was the first-ever national poll on how blacks and Jews feel about each other and it was keeping Rabbi Marc Schneier awake.

Schneier, president of the Foundation for Ethnic Understanding and of the New York Board of Rabbis, was troubled by a single thought: What if he was wrong? 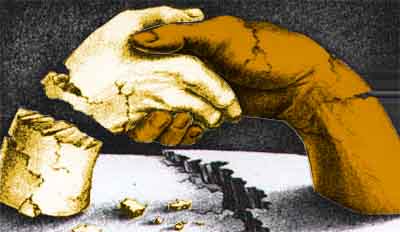 Schneier is one of many optimists who has been insisting for years that reports of deteriorating relations between blacks and Jews were greatly exaggerated. African-Americans and American Jews have their differences, like any groups, the rabbi has said. But, on the whole, he maintained the two groups continue to agree more than they disagree.

Now, for the first time, a major pollster, Kieran Mahoney of Kieran Mahoney & Associates, was conducting a national poll to see what most African-Americans and American Jews of all ages really think of each other.

The night before Schneier learned the results of the poll, which was released April 27, he was awakened in a cold sweat by the chilling possibility the poll might produce results other than those he hoped to see. The press conference already was scheduled. White and black dignitaries, including Martin Luther King III, were scheduled to appear.

What if the polls showed relations between blacks and Jews had collapsed? What kind of positive spin could he put on that?

Happily, no spin was necessary. As expected, the poll showed sharp differences on issues of racial "quotas" and Nation of Islam Minister Louis Farrakhan, whose highly critical statements regarding Jews, Judaism and Israel have drawn charges of anti-Semitism.

But the survey of 500 Jews and 500 African-Americans across the country also found that 69 percent of Jews and 59 percent of blacks thought blacks and Jews "should form a partnership to work on civil rights issues."

Significantly, Jews who had the highest "unfavorables" toward Farrakhan also showed the highest feelings that relations were deteriorating, Mahoney said afterward. "That was the only place among the figures where we got that kind of correlation, which indicates to me that Farrakhan is a key point of tension," he said.

By contrast, Jesse Jackson received an 84 percent favorable rating from blacks and 54 percent from Jews.

Unfortunately, the poll skirted over one important area that begs for further inquiry: the attitudes of the young.

As an African-American who came of age in the 1960s, I have detected less optimism and understanding among blacks and Jews who are too young to remember those happier times of coalition. Mahoney agreed. Younger respondents were "more negative and less inclined to believe relations are improving," he said, although they, too, were more inclined to say relations were getting better than worse.

One hopes their optimism will be rewarded. Like their elders, they will have to work at it.

Historically, blacks and Jews worked closely together in organized labor, the civil rights movement and various other causes. Today a new partnership of sorts is appearing in the private sector. An April 22 headline in The Wall Street Journal offers an example: "As Blacks Rise High in the Executive Suite, CEO is Often Jewish."

The Page One article by reporter Jonathan Kaufman, author of "Broken Alliance," a 1988 book about black-Jewish relations, describes top Jewish executives, like Michael Eisner at Walt Disney Co., Harvey Golub at American Express and Gerald Levin at Time Warner Inc., who have mentored the advancement of top black executives.

"It's more than coincidence," one black executive told Kaufman. "If you blaze the trail yourself, you are going to be more courageous in bringing someone else along."

In that way, blacks and Jews offer an important model for interethnic cooperation for a very diverse society. It begins with a refusal to allow the few people or issues that divide us to get in the way of the many concerns we have in common.