The season's unfussy dessert gets even more irresistible 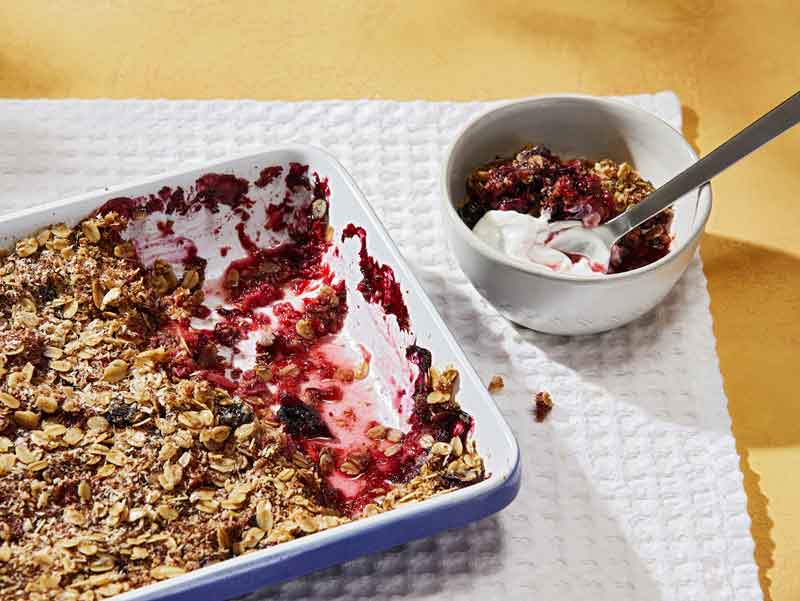 Regardless of what the calendar says, the official start of summer to me is when a bounty of berries appears at the farmers market. I always buy way more than my family could possibly eat fresh - because I, admittedly, tend to get carried away with my haul but also because I know I can cook pints of them into delightful desserts such as this berry crisp.

When I make a crisp (or cobbler, or pie), I like to let the fruit speak for itself, adding just enough maple syrup or honey to punctuate its inherent sweetness, and enough cornstarch or flour to thicken the released juices slightly, while keeping the filling amply saucy.

This crisp starts in that tried-and-true style, but its ambrosial coconut topping takes it to another level, bringing an exciting and unexpected dimension. The tropical ingredient comes into play in more ways than one. Virgin coconut oil moistens the rolled oats, which are the topping's main ingredient, imbuing them with richness and an unmistakable aroma.

A little oil goes a long way, luckily, since coconut oil is an ingredient best used sparingly when cooking with health in mind. (Despite its health halo, it has been shown to be only marginally better, or on par, with butter in terms of its effects on LDL cholesterol.)

A sprinkle of shredded coconut mixed into the topping drives home the coconut flavor message with a toasty chewiness. And, to stick with the theme, coconut sugar is one option you could use as the sweetener for the topping. It's made from the sap of the coconut palm tree, and it tastes similar to brown sugar, just a bit less sweet.

Because it contains some fiber, it gives a slower rise in blood sugar than other sugars do, so it has something of an edge health-wise. It's a small difference in the scheme of things, though, so feel free to use regular dark brown sugar instead without a second thought.

Seasoned with cinnamon and an enlivening pinch of salt, the topping, true to its name, crisps up beautifully when baked and is a worthy crown for the berries. Serve this crisp simply on its own or topped with a dollop of yogurt, a scoop of ice cream or, to keep it vegan and coconut-themed, some coconut-milk "ice cream." Whichever way you go, it's a luscious way to welcome summer.

Position the rack in the middle of the oven and preheat to 350 degrees.

Place 1/4 cup (25 grams) of the oats in the small bowl of a food processor or a mini-chopper and process until finely ground. In a medium bowl, combine the ground oats, the remaining 1/2 cup (50 grams) of rolled oats, the shredded coconut, sugar, 1/2 teaspoon of the cinnamon and the salt. Add the coconut oil and use your fingers to work the mixture together, evenly coating it with the oil.

Let the crisp rest at room temperature for 15 to 20 minutes before serving. Serve topped with a scoop of ice cream or yogurt, if desired.