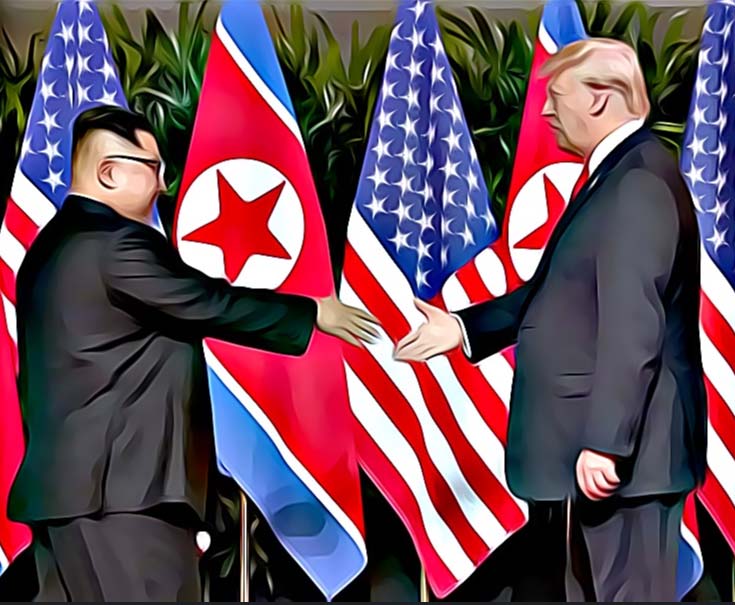 We didn’t learn this week whether North Korea will give up its nuclear weapons. Only time will tell.

But we did learn that US President Donald Trump knows how to negotiate.

All of the negotiations experts insist the opposite is true. “How could they agree to a presidential summit without first guaranteeing its end product?” they sigh, knowingly.

“Trump’s showmanship is dangerous and counterproductive,” they sneer.

“At the end of the day, for this to work, Trump will have to copy Barack Obama’s nuclear deal with Iran,” they insist.

Dennis Ross, who mediated the negotiations between Israel and the PLO that led directly to the largest Palestinian terrorism campaign against Israel in history, and Wendy Sherman, who negotiated Bill Clinton’s horrible nuclear deal with North Korea in 1994 and Obama’s disastrous nuclear deal with Iran in 2015, as well as all their esteemed colleagues have taken up their pens and stood before the cameras and clucked about how Trump’s Singapore show is amateur hour.

But what we actually saw in Singapore, for the first time since Ronald Reagan went to Reykjavik, was a US president who actually knew how to negotiate with America’s enemies.

Indeed, Singapore was the first time a Western leader from any nation has gotten the better of his opponent at the negotiating table.

There are three dangers inherent to the process of negotiating with enemies. And to understand how Trump succeeded where everyone since Reagan has failed, it is important to keep them in mind.

First, you have no guarantee that the other side will agree to a deal.

Trump can make the case for denuclearization to Kim. But he can’t make Kim agree to denuclearize.

Since the US has not defeated North Korea militarily, only Kim can decide whether to go along with Trump or not.

The first inherent danger of negotiating then, is that the other side walks away and – as PLO chief Yasser Arafat did in 2000 – chooses to make war instead of peace. Negotiations give credibility to the other side and may, as a consequence, make war a more attractive option for your opponent after a period of negotiations than it was when the talks began.

The last two dangers inherent to negotiations have to do with the actions of Western negotiators and leaders.

Democratically elected leaders have a greater tendency than dictators to become convinced that their political survival is dependent on their ability to deliver a deal. Once that happens, once a leader believes that the risk of failure is too great to accept, he becomes a hostage of the other side.

In 2000, then-prime minister Ehud Barak believed that his only chance of political survival was to convince Arafat to accept a peace deal with Israel. As a consequence, Barak stayed in the negotiations even after Arafat rejected his offer and tanked the Camp David summit in July. He remained in talks with Arafat and his deputies even after they launched the most murderous terror war Israel had ever seen.


The third danger inherent to negotiating with your enemy is related to the second danger. If a leader believes his future depends on getting a deal, the likelihood that he will accept a terrible deal skyrockets.

Obama made reaching a nuclear deal with Iran the chief aim of his second term. To achieve this goal, Obama abandoned every redline he set for himself. He let Iran continue enriching uranium.

He made no demand that Tehran curtail its ballistic missile development. He agreed to gut the inspections regime to the point of meaninglessness. And so on down the line.

With these risks in mind, we turn to the Singapore Summit. Trump’s playbook involves doing essentially the opposite of what American and Israeli negotiators have been doing for the past 30 years.

1. Don’t make light of your counterpart’s failings, play them up.

For decades, Israeli negotiators praised Arafat as a man of courage and Abbas as a moderate. Obama and his team praised Iranian President Hassan Rouhani as a moderate. By praising their opponents, the Israelis and Americans justified making concessions to their counterparts, without requiring them to reciprocate. In other words, Israeli and US negotiators put the burden to prove good intentions on themselves, rather than their opponents, who actually had no credibility at all.

By polarizing Kim and blaming him for the growing danger to US national security, Trump made the case that Kim had to prove his good intentions to Trump, not the other way around, as a precondition for negotiations. Kim was required to release three American hostages and blow up his nuclear test site.

He was the one who needed to prove his credibility. Not Trump.

Trump’s three predecessors all begged the Chinese to rein in the North Koreans. In doing so, Clinton, George W. Bush and Obama handed all the leverage to Beijing. To curb North Korea even temporarily, the Chinese demanded continuous US concessions, and they received them.

Trump on the other hand, threatened China. He linked US-China trade deals to Chinese assistance in curtailing North Korean threats and aggression and agreeing to a US goal of denuclearizing China’s client state.

To prove his seriousness, Trump managed to lob 58 missiles at Syrian targets in retaliation for Bashar Assad’s use of chemical weapons while he was eating dinner with Chinese President Xi Jinping at his golf club in Florida.

Trump’s linkage of US-China trade to North Korean denuclearization has paid off. Xi cut off North Korean coal exports to China and limited fuel shipments from China to North Korea. A month later, Kim announced he wanted to meet with his South Korean counterpart.

3. Make it easy for your side to walk away from the table and hard for the other side to jump ship.

Trump accomplished this goal through a series of moves. First, he and Defense Secretary James Mattis threatened to destroy North Korea. Second, Trump coupled the threats with the largest increase in defense spending in memory. Third, Trump has repeated, endlessly, that he has no idea whether talks with Kim will lead to an agreement, but he figures it’s worth a shot. Finally, after Kim insulted National Security Adviser John Bolton, Trump canceled the summit.

Not only did Trump’s polling numbers not suffer from canceling the summit, they improved. As for Kim, Trump’s nixing the summit taught him two lessons. First, he learned the price of failure.

Second, Kim learned that unlike his predecessors, Trump doesn’t fear walking away. Indeed, he’ll walk away over something that none of his counterparts would ever dream of jumping ship for. If Kim wants to negotiate with Trump, he will respect Trump’s choices.

Kim’s attack on Bolton was reasonable from his perspective. Ever since Clinton signed his failed nuclear deal with Kim’s father in 1994, Bolton has been the most outspoken critic of nuclear diplomacy with North Korea in Washington. Bolton opposed – rightly – every diplomatic initiative and agreement every administration adopted with Pyongyang. There is literally no one in Washington more skeptical of the chances that an agreement with North Korea will succeed than Bolton.

And there he was on Tuesday, sitting at the negotiating table in Singapore.

For the past generation, American and Israeli leaders engaging in negotiations with their enemies have given their opponents a say – indeed, they have routinely given them veto power – over the members of their negotiating teams. US and Israeli leaders used their team roster as yet another tool to appease the other side. This, while ignoring the concerns of their domestic constituencies.

Trump took the opposite approach. After setting up the talks in a manner that minimizes the cost of walking away from the table for him and maximizes the cost for Kim, he chose negotiators that would both minimize the chance of reaching a bad deal and assuage and encourage his constituents that he can be trusted. Both Trump’s supporters and detractors know that so long as Bolton is at the table, the chance of the US agreeing to a bad deal is fairly close to zero. Trump’s rising poll numbers and the fact that the majority of Americans support his negotiations with Kim show that his efforts have paid off politically.


5. Take control of the clock.

Reporters in Singapore were shocked when Trump informed them Tuesday afternoon that he and Kim were about to sign an “agreement.” But sure enough, shortly thereafter, they were shepherded into a grand hall for a formal signing ceremony.

A quick look at the “agreement” showed that there was really nothing there beyond platitudes.

Trump’s many critics were quick to take him to task for his “deal” because it was purely aspirational.

By signing the piece of paper, Trump took all time pressure off of himself and his team. They have their deal. He signed it. In a ceremony with a fancy fountain pen. They have all the time they need now to do what it takes to get Kim to cough up all of his nukes.

On the other hand, time is working against Kim.

US Secretary of State Mike Pompeo said on Wednesday that the economic sanctions on North Korea will remain in place until after North Korea has denuclearized in a verifiable manner. In other words, assuming Kim cares about his economy and is in this for the money, Kim will want to reach a deal and implement it as quickly as possible.

Trump’s critics in the US ratcheted up their attacks against his summitry with Kim on Wednesday and Thursday. But everything they say just discredits them. Trump is only dealing with a nuclear armed North Korea because all of his predecessors enabled Pyongyang’s nuclear armament through feckless diplomacy. He’s only there to try a new approach because their old approach gave Kim the theoretical ability to nuke New York.

And now that he’s actually negotiating, it is clear that what they really fear is not that he will fail like they did. They fear that he will succeed, like only he – a loudmouthed real estate mogul and reality show star from Queens who couldn’t care less what they think of him and happened to write a book called The Art of the Deal – can do.